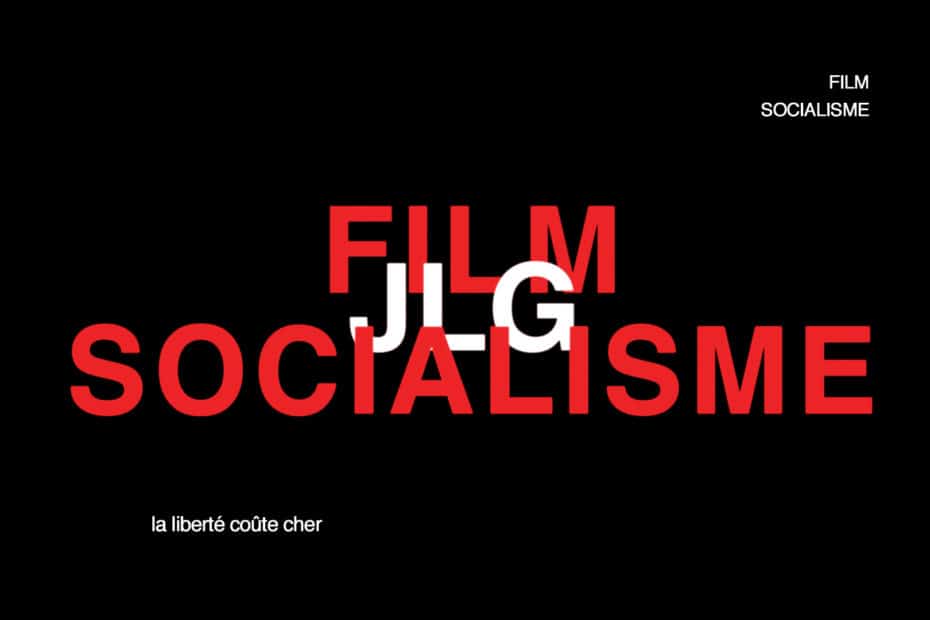 Whatever way one chooses to define the term political, the label is often used when talking about Jean-Luc Godard’s works. His ideological cinema reached its limits (some would say expanded far beyond them) during the years of the Dziga Vertov Group,1969-1971. This was not the most exciting part of Godard’s career, and he later looked back on the era with a somewhat critical mind. One of those films was The Wind From the East (Le vent d’est 1970). Four decades later, Film Socialisme was released at the Cannes festival in the Un Certain Regard section. The reviews were mixed, but it remains Mark Kermode’s favourite film. The film is comprised of three parts.

The first section (Des choses comme ça) is mainly set on a luxury cruise ship. The images range from stunning HD to grungy cellphone videos at a time when the video quality was far from stellar. Godard is not primarily out to make fun of the cruisers in general, but there are some passengers that are essential to the themes of the film. They seem to be connected to gold in one way or another. An old Nazi spy and a Russian officer are both looking for some gold coins from the Spanish treasury decades ago. In one scene, a Jewish man is asked what happened to the gold from the Bank of Palestine, and he points at his teeth.

As Richard Brody points out, it’s a sordid reversal of what transpired in the concentration camps. A relative of the Nazi spy wears some of the coins as a necklace. The various ports of call (among them Barcelona and Odessa) all carry meaning and will be dealt with once again in the film’s final part. The film’s 102 minutes are almost overwhelmingly dense and filled with impressive imagery from different sources, including other films. The references are on full display. The sensations might be difficult to unpack on a single viewing. Whether or not the film is easily digestible, the amount of Gefundenes Fressen can hardly be questioned by any serious viewer. This is the polar opposite of intellectual flatulence.

Ruben Östlund’s Triangle of Sadness bears some superficial resemblances to Godard’s film. It’s likewise a triptych, and the second part takes place during a luxurious yacht trip. There we will follow a couple introduced to the audience during the first section, Carl and Yaya. Among the other passengers is a Russian businessman, Dimitry, who made a fortune from fertilizers. The ship’s captain is an American far-left guy. A dichotomy that might be fodder for an illuminating or at least humorous rumination on politics, but no such luck. The extended setup merely results in lines like, “I sell shit”. In a subsequent verbal duel between Dimitry and the captain, they simply read quotes from their phones, for or against capitalism.

Meanwhile, the affluent passengers become violently ill and start puking and soiling themselves in a far too long segment. As so often in Östlund’s filmography (the later films, in particular), we will witness an array of missed opportunities. Fertilizers are not necessarily manufactured from shit but from natural gas and are actually in grave shortage at the moment due to the war in Ukraine. Since Östlund insisted on the shit angle, I was convinced it would come into play during the last segment of the film, set on a deserted island, but by then, the whole concept seems long forgotten. “Concept” might be an overly strong word for what the director came up with for the 147 minutes running time.

In many ways, the films couldn’t be more different, the superficial similarities notwithstanding. Where Godard continues to be curious and manages to deliver a new experience, Östlund threads water. While Film socialisme is filled with staggering images, the cinematography in Triangle of Sadness, while technically proficient, wasn’t even impressive enough to warrant a Swedish Film Award nomination. With all the puke and shit on display, his film still feels as empty as someone breaking wind, which makes sense since there is nothing to neither digest, absorb or assimilate. Spinal Tap might have approved.

As a sign of invention, one of the trailers for Godard’s film presented the entire film at high speed. I mentioned in an earlier piece how Godard responded to critics in a factual and sober way. In comparison, Östlund and his producer texted Swedish critics that had the temerity to give the film only 3/5 in their reviews. A behaviour akin to a child farting in church. The awards heaped on the film say a lot about the current cultural landscape in general and the cinematic one, especially. Ironically, the film is not eligible for an Oscar, which feels like the most obvious award for such a work. It’s still nominated for Golden Globes, though.

If the characters in Triangle of Sadness are puking or shitting gold, the director seems to gag on his success as well, or at least not be content with it. The sceptical reviews seem to hit him hard, and he has repeatedly said things like, “Critics don’t want to have fun”. That such an anti-intellectual reaction doesn’t stop rewards like the 118 grams of 18-carat gold that the Palme d’Or is composed of is no surprise. At least the film didn’t join Portrait of a Lady Misfire and Get Out! on the Sight & Sound best films list.

If anyone would like to see a film that deals with a similar topic as Godard in a serious way, I suggest Manoel de Oliveira’s Um filme falado (2003), where a university professor brings her daughter on a cruise and teach her about history during the voyage. John Malkovich plays the captain in one of the director’s most accessible films.