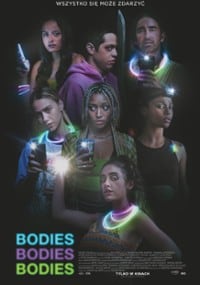 Bodies Bodies Bodies is the second film directed by Halina Reijn, following her splendid debut Instinct. They are quite different from each other. While the debut is a mature drama, the sophomore film is a Gen Z satire of sorts, produced by A24.1 A24 also released Instinct briefly.A group of seven young people (20-something) are planning a hurricane party in the remote house of David’s wealthy parents. Once there, things quickly spiral out of control, heightened by the decision to play the titular game. We first meet Sophie and Bee, who are in a relatively new relationship. Bee (Maria Bakalova) is not only a foreigner but also an outsider who will meet the group for the first time.

When they arrive at the mansion, everyone is surprised to see them and claims that Sophie neglected to text them and confirm her presence. Are they playing mind games on her? The group of seven are comprised of three couples. One consists of an older guy, Greg (Lee Pace) and his podcasting girlfriend, Alice (Rachel Sennot). Initially, the latter gets constant praise for her media efforts, but is something lurking under the polite surface? When Greg sabers a champagne bottle, it seems that the tension is released along with the champagne. With the booze flowing, the game begins, and people start dying for real. David is the first victim, found with his throat slashed by the previously mentioned sword.

When the electricity breaks down, everyone becomes a potential suspect/victim. The trust between the remaining members deteriorates, and accusations are flung everywhere. The film undeniably plays with horror clichés, but even though several deaths will follow, Bodies Bodies Bodies aims for more than shivers and thrills. It´s on those other points that the film is bound to be divisive. As many films prove, the satirical aspect could easily become the most problematic. The script, written by Sarah DeLappe, portrays a group of wealthy people (except Bee). There are scenes where the dialogue plays like a Twitter feud, in particular towards the end. The most appealing thing about the script is that it never appeals to the spectator’s sympathy.

This is a group of supremely unsympathetic people where we don’t root for anyone, not even Bee, who could easily have been given the role of the token outsider who stands in for the spectator. Still, we watch the whole group as outsiders without really caring for anyone. That might actually be the film’s major strength. Otherwise, the script is not the most substantial part of the film, even though the cast works wonders with the material it is given. The most enjoyable aspect of the film is watching the cast ameliorating the lines they have been handed. Most critics single out Rachel Sennot’s Alice, but everyone makes the best of their respective roles.

Reijn brought Jasper Wolf along from the first film (He also shot Monos that year), and the cinematography is constantly serviceable, if not striking. Still, he does the utmost out of every scene, not least in the later indoor ones after the power is cut. The EDM score by Disasterpiece is appropriately used to maximum effect without going for cheap thrills. In several ways, Bodies Bodies Bodies delivers reasonable entertainment, but how deep the satire goes is up for debate. There is no lack of films which aim to lampoon social media. How you judge the film will largely depend on the viewer’s reception of the very last line in the film.