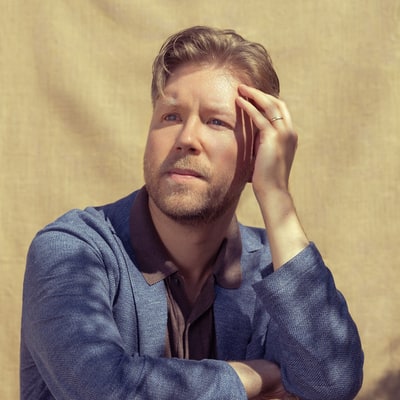 The Woodcutter Story (Metsurin tarina) reviewed here was one of the highlights, not only of Semaine de la Critique but of the whole Cannes Film Festival this year. I had the opportunity to talk to the director, Mikko Myllylahti, about the film He is previously known as the scriptwriter of The Happiest Day in the Life of Olli Mäki (Hymyilevä mies 2016).

So how did the project start?

I have a background as a poet and started out when I was twenty-three. I have written four collections of poetry in Finnish, of course, so that was my medium first, but then I was accepted to Film School in Helsinki, and I had this passion for cinema. I studied screenwriting and directing, and I worked as a screenwriter. I wrote one feature that was here six years ago, The Happiest Day in the Life of Olli Mäki.

Then I felt that I wanted to direct and I was searching for a story. I had this tree in my yard that needed to be cut down, and then I called this woodcutter. I was fascinated by this man. He had a hard life but was really optimistic about it. I found it quite funny, but also something that embodied hope in a strange way. I felt it could work as a story about hope in a world that seems to have very little of it, so I proceeded to write the screenplay. I thought it would be a source of comedy while still addressing large philosophical issues.

I decided beforehand that I wouldn’t mention Kaurismäki, but then you name him as a huge influence in the press notes. The first twenty minutes of the film reminded me of Drifting Clouds (Kauas pilvet karkaavat 1996). I wonder which other influences you have.

I really like Kaurismäki, and he is a master, but I didn’t think about him while making this film. I thought more about Bresson but also Kitano. The way he makes things laconic in a different way from Bresson or Kaurismäki. We Finnish people can be quite laconic, not least in the region where this film takes place, and we often don’t talk very much, so it fits the style. I felt I was making a mythical story even if it has a contemporary local background. Even the bible has these elements.

You mention The Book of Job as a reference.

Yes, exactly. That inspired me. I don’t have a religious belief, but the bible is interesting for its stories.

Talking about storytelling, was that a challenge for you, being a poet? It is a bit surprising that you chose to write the script all on your own, but then it worked out so well. How did you approach that aspect of the process?

It was a balancing act, definitely.I had to understand that this was a film that would be released in cinemas, so I didn’t want to make it too obscure and poetic (if poetic is the same as obscure). I really like the Coen brothers and the way they use genres.

They twist genres in their own way.

Yes, so they became an influence as well. I would label this film as an existential dark comedy, but it has these thriller elements as well, and I liked to go deep into that psyche and the craziness. I like that kind of cinema where you can go into transcendence if you do it in a funny way.

Was it easy to get this film made? You mentioned that you had some great script doctors, but this seems to me like a script that would make most producers shake their heads.

Yes, but I am very fortunate to have these producers who were also involved in the Olli Mäki film. They told us that they believed in us, which is always nice to hear in such a lonely and scary job. They said that if they got the film’s intention, that would be enough. The budget was 1.8 million Euros, and it was a co-production with Denmark and The Netherlands.

Since you mentioned The Netherlands, I am curious to know if you are familiar with the director Alex van Warmerdam.

Yes, he made this film Borgman. I saw it and really liked it.

But only that one? He is a favourite of mine, and many things in your film reminded me of him.

It was while making the film that someone mentioned it, and pointed out similarities. I watched it and really liked it.

The references of Mikko Myllylahti

You have mentioned the book, The Left-Handed Woman by Peter Handke as a reference. Have you seen the film, as well?

No, I haven’t. I think the book originally was a film script.

I had written a few drafts for the film, and some parts in my script felt strange to others and even to me. Then I read The Left-handed Woman and was struck by how Handke uses dialogue. It’s like the subtext is said out loud. I also like Der Himmel über Berlin (1987) a lot. The way the angels can hear what people are thinking, and the poetic quality in that. I felt that I was building towards something similar, and I thought that I could trust what I was doing.

It’s even more evident in the film version with Edith Clever, and it’s shot by Robby Müller, so it looks great.

I have to watch it.

Talking about the other co-production country, how did you approach the use of music and sound in the film.

Well, the composer Jonas Struck was involved early on. He is more experienced than me, obviously. He read the script and composed several pieces of music. I liked lots of what I heard, and the discussions continued. It was all very organic. He came up with the idea of using a choir. Sometimes that could be too much in a film, but here it really works.

Apart from the obvious use of the landscape, the interiors are captivating. You have frames within frames, and sometimes the characters are literally framed, and it’s often done with long shots.

Yes, I enjoyed that very much, and if you watch it on a big screen, it works beautifully. During the editing, I got a bit nervous since it didn’t look the same way, but my editor assured me that it would be fine with those long shots. I really don’t want to edit if there is no reason. Sometimes it bothers me that people just cut back and forth.

Trying to cover up for their lack of ideas.

Yes, exactly, and nowadays, it’s too common with digital cinematography to basically make the film during the editing. Sure, you can make a very nice film like that, but it doesn’t interest me.

You used the word organic earlier about the music, but the whole film feels organic to me. How did you achieve that? Far too often, you see films where the cinematographer, the editor and the costume designer seem to work on different films, but not here.

I’m very happy to hear that. We really put a lot of effort into making the film feel unified. It was very important that everyone was on the same page. The cinematographer (Arsen Sarkisiants) is a young, upcoming guy who has done beautiful work already. This was his third or fourth feature. The editor (Jussi Rautaniemi) is the best in Finland, I think. He worked on Kuosmanen’s films, and then there was the composer as I mentioned. We put a lot of effort into that. In our production company, there is this saying that the film can only contain what works for everybody. If the cinematographer creates a wonderful shot that doesn’t fit the film it is useless.

There were many discussions, and you have to trust the heads of each department. When the costume designer (Minke Lunter) read the script, she said “With the tone of the script we need an iconic costume. I have an idea. Then she brought the suit, and I immediately felt that when people see that image, they will say “That’s the woodcutter!”

4 thoughts on “Interview with Mikko Myllylahti”