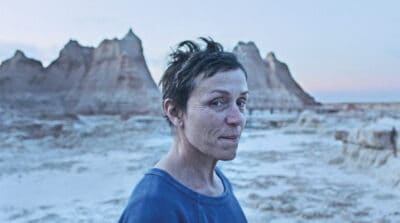 Nomadland was the winner of last year’s Biennale in Venice. Considering the previous laureate, that was some large shoes to fill. It’s far from the only prize the film has received. It might even break the record of most awards being given during a season. Based on the eponymous non-fiction book by Jessica Bruder, it stars Frances McDormand, who also co-produced the film with director Chloé Zhao. She plays Fern, who is homeless after a mine closed down for good. We follow her and other people in similar circumstances. Many of them are played by actual nomads. The usage of them could definitely be discussed.

The Cahiers du Cinéma critic, Thierry Jousse introduced the concept of hygiénisation. One of his examples was Bruno Dumont’s debut feature, La Vie de Jésus (1997). In that film, it concerned the depiction of the Arab immigrant, Kader. The point being that the main characters were portrayed as simple-minded and primitive, whereas Kader seemed to possess an almost inhuman purity. That idea struck me while watching Nomadland. Even though the characters lead harsh lives, it doesn’t really seem to take its toll on them. At least not when it comes to their sense of generosity and altruism. While it’s a relief that the director doesn’t go for easy conflicts, the nomads’ portrayal still feels idealized.

As mentioned above, there are not that many professional actors in the film. One of them is David Strathairn, who appeared in countless John Sayles films.2 Countless equals 7, including Sayles’ debut feature, The Return of the Secaucus Seven (1980). That might not be a coincidence since Sayles’ films likewise tend to show the characters in a benevolent way. It should be pointed out that he has a far better grip on how he depicts his characters and the society they live in than Chloé Zhao has in Nomadland. Why did the film feel so distasteful? What was my main beef with the portrayal of those people?

To find the answer, I will take a detour via Agnès Varda. In her first feature, La Pointe Courte (1955), she adroitly separated the obviously fictitious love story with a more documentary-like approach with the fishermen in the village, virtually treating them as separate stories. Later films also showed attention to the formal aspects, while maintaining the human qualities. In Sans Toit ni Loi (1985), we follow the elusive Mona who has dropped out of society. She doesn’t seem to care about anyone or accept help, but she actually says “Thank you” to someone at one pivotal moment. It’s a strong scene, even though Varda doesn’t dwell on it. The film is elevated by Joanna Brudzowicz’ haunting score.

In Les Glaneurs et la Glaneuse (2000), Varda is one of the protagonists, along with the people she portrays. We meet people who salvage things that others throw away. Some do it by necessity, others with an ethical rationale. Whatever their reasons are, Varda’s respect for the people she films is evident. On top of that, she also philosophizes about art and the fact that it likewise could be comprised of material that others disposed of. The director’s part in and behind the film is always transparent, and as always, she throws in a healthy dose of humour as well. With the combination of formal rigour and playfulness, Varda earns the credit “Cinécrit par Agnès Varda”.

Returning to Nomadland (reluctantly), it’s rather a film that doesn’t seem to show any interest in any character, except for Fern, who is present in virtually every scene. Apparently, initially, one of the real nomads, Linda May, was supposed to be the main character. Then Frances McDormand came on board, and things changed. It’s difficult to imagine what that project would have looked like. I wasn’t too fond of the film when I saw it, but the more I thought about it, the less I liked it. Sifting through some reviews, I found that the film wasn’t as unanimously praised as I expected.

One of the most scathing pieces was the one written by Richard Brody. Among other things, he says that ” The result is a movie that conveys the sense of aestheticizing disaster. The landscape, as seen in “Nomadland,” isn’t beautiful but picturesque—not discovered in images but seemingly chosen as décors.” This is an apt description of the overall feeling of forced artificiality that permeates the film. There is never a feeling of a genuine interest in the landscape or the people inhabiting the space. Instead, the whole affair comes across as contrived, with a more dubious intent in mind. Possibly, the awards mentioned initially. The sappy music by Ludovico Einaudi indicates that as well.

A metaphor for Nomadland could be the scene in Widows (2018) when Jack Mulligan holds a speech in front of the people he pretends to care about, only to get into his car and, literally, drive towards greener pastures. In the same fashion, Chloé Zhao displays little serious interest in her characters but seems more interested in leaving them behind and driving away towards Awardland. A trip that has been highly rewarding and successful so far, and there are few signs that the success will stop. The end credits contained the phrase “Written for the screen”. One of the most pretentious credits in existence and far away from the playful Cinécrit of Varda.