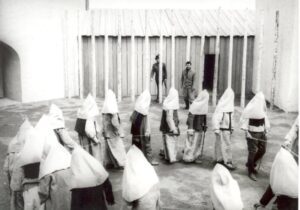 There was a time when I was young and approving. In the late eighties, I visited Hungary frequently, and I often socialised with cinephiles and filmmakers. Some of them were surprised and delighted by my interest in Hungarian cinema. There was one topic that I shied away from; Miklós Jancsó. At the time, I hadn’t seen any of his films, and I wasn’t proud of it. Things would change in 1989. I happened to be in Budapest when the Berlin wall came down, which was obviously a fascinating experience. A week later, I was in Paris, where there was a cycle of films about revolutions and historical change. Among films by Straub, Rocha and others, there were also films by Jancsó.

I saw two of them. The Confrontation (Féneys Szelek 1969) and The Round-Up (Szegénylegények 1966) in Centre Pompidou. Set in different periods in time, both films nevertheless felt like they could work as comments on what had just transpired. In the former film, set in 1947, some communist students enter a monastery college in order to debate political issues with them. Eventually, the most vital arguments are within the group, where different power struggles ensue. The main one seems to be between the moderates and the militants, the power seemingly shifting between the two as represented by two characters. The film begins with the French revolution song Ca ira!, which gave the film its French title, Ah, Ca Ira!

That is merely one fashion that Jancsó’s film alludes to other historical periods. Many of the women wear miniskirts that were obviously not the fashion choice of 1947 but rather point towards the 1968 student riots.1 Ironically the film was selected for the Cannes Film Festival in 1968, as was The Red and The White (Csillagasok Katonak), also directed by Miklós Jancsó. This was Jancsó’s first film in colour and one of the protagonists, Laci Fekete2 Fekete means black. is wearing a bright, crimson shirt throughout the film. As opposed to his fairly moderate approach, Jutka (Andrea Drahota) believes in violent methods. Song and dance are present from the very first shot and is occasionally used as a narrative device as well.

The significance of the internal conflicts and what actual power the student leaders have is unclear or at least fluid. The real power might be elsewhere entirely, and the student game’s king and queen might be mere pawns. The film was shot by Tamás Somló, who had lensed most of Jancsó’s films since his debut in 1959. This was their last collaboration. The reason being that Jancsó wanted to use circular movements with the camera, which Somló wasn’t comfortable doing. The task would instead go to János Kende, who previously worked as an assistant to Somló. He would become the DOP for the majority of the films until 1992. His first was Silence and Cry Csend És Kialtas in 1967.

The Round-Up is set in a prison located on the vast Hungarian plain. A narrator delivers a brief backstory. The failed revolution of 1849 is largely forgotten. There are still some outlaws around. The authorities call them criminals, but they are freedom fighters in the eyes of the people. Count Ráday is given the task to secure the outlaws, and his methods were ruthless and strikingly modern. The very first thing we hear in the film is the hymn of emperor Francis being sung. It served as the anthem of the Austrian-Hungarian empire, and it won’t be the last time we hear that piece of music. As opposed to The Confrontation there is not much music in the film.

We follow the proceedings in the prison. People are found dead. The authorities find a man called Gajdor, and after forcing him to put a noose around his neck, he admits he killed some people. He is told that he will be released if he can point out someone who murdered more people than he did. He understands and complies. From there on we will observe a puzzling cat and mouse game. Observe is the operative word since this is hardly a film that goes for emotional involvement. It is quite abstract, not only because of the high contrast black and white images but also in the exaggerated costumes and the setting itself, which was built for the film.

There’s an apparent irony between the open plain that would signify freedom and the prison. Attempts to escape are futile, and early on, a man who is released is shot dead without any emotional involvement. The investigation in itself is also unclear. As András Bálint Kovács points out, the film “created the most genuine and comprehensive visual and narrative model of the Kafkaesque experience of Central European historical existence, which would be Jancsó’s central subject matter for the following thirty years.” He likewise notices, “The basic elements he uses to build up his constructions of choreographed movements are those of the ancient experience of those living defenseless in this wide-open space.” 3András Bálint Kovács, “Jancsó and the Ornamental Style”

The nightmare logic of the film universe arises from the fact that there is nothing to hold on to, neither in the narrative nor in the physical environment itself. The only paths that exist are those created by the camera movements and when the prisoners are made to form patterns. We don’t understand the rules of the game any more than the outlaws. The spectator just follows the maze towards the inevitable end. The inevitability would be a trademark for Jancsó. No matter how much people try to change their fate, the outcome is often the same. And it’s not often clear who is actually pulling strings. The clearest example of this appears in his 1981 film A Zsarnok Szive.

Even if it might not be obvious today, Jancso’s influence on other filmmakers is in plain sight. Theo Angelopoulos is a prime example. If one wants to stay in Hungary, Béla Tarr is an even more obvious choice. In the latest Sight & Sound poll, he listed The Round-Up as one of his favourite films of all time. In the credits of the film, we find Tarr’s wife and editor, Ágnes Hranitzky as an assistant editor.

When it comes to my feeling of watching these films in 1989, the experience was one of sadness. Even though the downfall of Eastern Europe was a momentous event, I didn’t encounter the happiness that I had expected in Budapest. Many people expressed disbelief and implied that things might soon get worse in other ways. What sounded odd to me then, struck me hard when I saw those films. The inevitability of power rearing (or more aptly hiding) its ugly head once again, but with other titles and uniforms is a recurring theme in Jancsó’s oeuvre. And the defeat always seems to land in the same place.

The film is available on easterneuropeanmovies.com for a fee, among other Jancsó films including The Confrontation. It is also available in bad quality on youtube, divided in 10 parts.