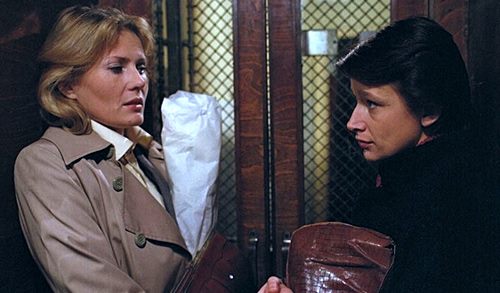 Another Thursday, another Hungarian film, Another Way. That was the English translation of Karoly Makk’s Egymasra Nézve, which literally means Seeing each other. Released in 1982, the film is ostensibly set in 1958. The body of Éva Szalanczky, a political journalist, is found near the border. Her friend Lívia is in a hospital with a broken neck, while her husband, Donci, is under arrest. In a flashback to the previous year, we will learn about the events that lead to this sad conclusion. We see Éva landing a job in a newspaper called Igazság (meaning Truth, just like Pravda) after being unemployed for political reasons. She shares an office with Lívia and is instantly attracted to her.

Another Way of editing

At the newspaper, Éva is trying to push the boundaries of what can be written in print. It seems she wants the paper to live up to its name. During a party, she talks to people who tell her how an apparently successful cooperative actually operates behind the curtain. She writes an article about what she learned, but her editor tells her it must be redacted. The editor is just a small cog in the machine, and those in power do not applaud even the edited version. The topic of the 1956 events and what they should be named is another hot potato that one was supposed to tiptoe around in those days, and even much later.

The film is directed by Karoly Makk, mostly known for his masterpiece Love (Szerelem 1971). A string of serviceable films followed, but Another Way was a return to the former heights. It’s an adaptation of a book by Erzsébet Galgóczi, called Another Love (Törvényen belül), and she also co-wrote the script with the director. It follows the structure of the book fairly well. The main parts were played by two Polish actresses, Grazyna Szapołowska and Jadwiga Jankowska. The latter won the actress award in Cannes 1982, but both turn in remarkable performances, even though they were dubbed in Hungarian. That was also the case with Slovak actor Jozef Kroner who played the editor of the newspaper.

Red is the Coldest Colour

It’s the female leads who carry the movie. The subtlety in the interaction between the two women is touching (no pun intended) and gripping. Makk admitted that for him a love story was just that, regardless of the protagonists’ sexual orientation. They meet in several places, including a bar with striking red walls. Otherwise, their meetings take place outside, even though it’s winter. In a park, they are spotted by the police. Éwa has to come with them, whereas Lívia is merely told that she should know better. A reminder of how sensitive the topic of a gay relationship was at the time.

According to Makk, it hadn’t changed much when they made the film either. In an interview, he said that he knew almost nothing about lesbian relationships then. Before shooting a love scene, the assistant director János Xantus asked a gay friend some really basic questions. The answers were extremely frank, and she ended up, calling him an idiot. When Xantus told the director about the incident, he was so amused that he immediately added the conversation to the script. When a policeman asks Lívia about gay sex, the answer is exactly the one that Xantus’ friend gave him. The cinematography boasts a subdued colour palette, and the overall ambience of the film is quite bleak.

Gratuitous Sax but no Senseless Violins

At the time of Another Way, It was deemed possible to criticize the former government, but any criticism against the Kádár regime had to be done indirectly, often with stories set in the past like this one. As Lilla Gyöngyösi points out, even though the film is set in the Rákosi era, it makes no secret about the fact that there is a continuity between the two systems. It’s not accomplished through anachronistic means like in Jancsó’s The Confrontation (Féneyes Szelek 1968) but more in the overall mood.

When it comes to intimate scenes, they are tastefully made. The film never feels exploitative, and the juxtaposition of the theme of gay and political oppression works fairly well. A contemporary woke community might feel differently about that. If the film should be faulted for anything, it’s the way the music is sometimes used. Most of the time, it’s carefully, if not very inspired, but occasionally a saxophone is employed, which verges on the annoying. That is a marginal error in an otherwise powerful film that has stood the test of time. It’s available on Easterneuropeanmovies.com for a fee.