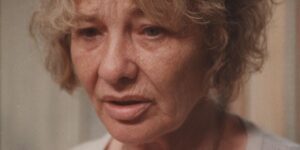 A Very Short Film About Time

Another Thursday, another Hungarian film. The director, Attila Janisch, made his first feature, Shadow on the Snow (Árnyék a Havon), in 1992. Five years later, it was time for his second feature, Long Twilight (Hosszú Alkony 1997). Based on a short story by Shirley Jackson, The Bus, released 32 years earlier, the screenplay by András Forgách takes the novel in some unexpected directions. Like its predecessor, it’s a short work that clocks in at 70 minutes. Mari Törőcsik stars as an archaeology professor who is being honoured at the beginning of the film. She talks about her age, saying that “I advise everyone to get old. Old people eat little, sleep little and sleep light. They have their memories and unlimited time.”

This blissful summery scene in broad daylight will soon move to a very different territory. She leaves to visit a friend and gets lost. Suddenly a bus turns up, and the driver urges her to get aboard. For some reason, she does. The driver is rude and generally unpleasant. The passengers seem weird as well. After some time, she seems to fall asleep. It gets darker, and a man leaves the bus in the rain and seems to be run over, without anyone reacting. Our nameless protagonist is told to leave the bus. After wandering around for some time, she manages to get a ride with two truck drivers, and that’s just the beginning of her tribulations.

The trip is clearly a journey of the mind. Time and space seem constantly to be just beyond the professor’s reach. A locket seen in the beginning accompanied by a ticking sound makes it impossible not to think of Wild Strawberries (Smultronstället1957). That is only one of the film’s many elements that are adroitly woven together. A later scene with a doll would not be out of place in an Argento film. Our main character is constantly bewildered by the dreamlike and surreal atmosphere. Still, she never seems to be broken by her experiences, but stays resilient throughout, constantly questioning what is going on, not without some anger sometimes. Mari Törőcsik turns in a, yet another, wonderful performance.

The impact of the film depends on several factors. Janisch only directed three features. Many of his collaborators worked on all three. Production designer, Attila Kovács is one of them, and it’s obvious that he understands the director’s objectives perfectly. The same goes for the editor, Anna Kornis. The same year she worked on János Szász’ splendid Witman Fiúk and twenty years later she edited The Butcher, The Whore, and The One-eyed Man. Gábor Medvigy was the DOP on two of Janisch’s films. This one and After the Day Before (Másnap) in 2004. Possibly mostly known for his cinematography on Sátántangó (1994), his signature camera movements and his handling of darkness also helps to elevate the film to a unique experience.

In some ways, the structure of the film is reminiscent of the works of Alain Resnais. It would not be out of place to also mention Alain Robbe-Grillet. The latter’s influence would be even more obvious in Másnap. Still, the film never feels derivative in style but manages to carve out its own distinctive universe. When it comes to Shirley Jackson, it can be noted that her short story, The Summer People, was the model of Janisch’s exam film. It’s called Zizi (1982) and stars Törőcsik and Júlia Nyakó. Forgách and Kornis worked on that film, as well. After the failed attempt to invoke the writer’s universe in Shirley, here is a film that actually delivers on that front.

The film is available on the Eastern European Movies, streaming page, among other great films, for a small fee. I am not affiliated with them in any way.