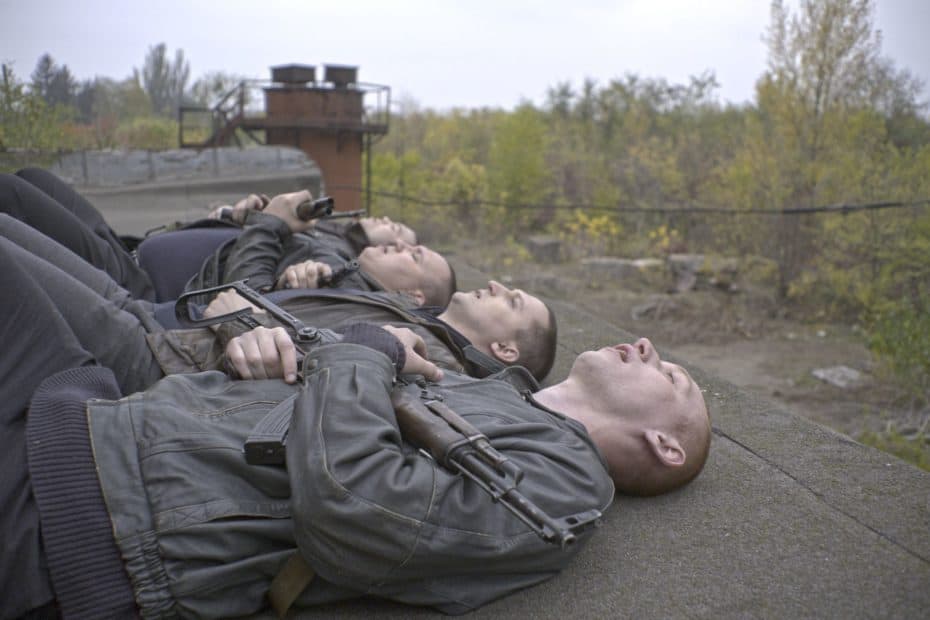 Oleg Sentsov’s Rhino (Nosorih) is a gangster film set in Ukraine. It begins splendidly with a sequence tracking the titular character’s first decade in the house where he grew up in the eighties. In one seemingly unbroken take, we see his father coming home from prison, being sent back after abusing his mother, and a myriad of other events as well. It’s a tour de force that the rest of the film will never match. Later in the nineties, Rhino (or Vladimir “Vova”) gets into a fight with some gangsters, and his only way of protecting himself seems to be to join the rival gangsters that will give him the protection he needs.

For the rest of the film, Vova and his friends behave like they want to emulate gangster films that they have seen. There is violence, drugs, hookers and the rest. From then on, the story is told in flashback since Vova is confessing his deeds to a mysterious man in a car since he seems to have second thoughts. Rhino paints a bleak portrait of Ukraine, filled with violence, poverty and criminality. If that wasn’t enough, the population also must endure Dr Alban’s It’s My Life when they attend discos. There is a noticeable quality to Bogumil Godfrejów‘s lensing, but it can’t disguise the fact that the story trods a much too worn path.

This includes the dialogue where you sometimes wonder if characters are merely quoting other films. From the hoodlum’s tough talk to the wife’s complaints about Rhino not even taking a shower “after being with your sluts”. Is this a film where the director merely wants to make a meta-film out of other works? It turns out that such a film would be waiting just around the corner. It’s called Cinephilia (Sinefilija) and is directed by Lithuanian director Algimantas Puipa. The description says, “With gentle irony, Cinephilia unmasks the illusion of film. Characters migrate through the worlds of reality and fantasy, sometimes both at the same time. A dark comedy in which the fates of the characters intertwine.”

Calling the irony gentle is the most ironic thing. There is nothing gentle or subtle in Puipa’s film, which starts out with two men talking about the moon landing while looking at the sky. One of them claimed it was faked by Kubrick. This refers to the old conspiracy tale which was made into a mockumentary in 2002 called Opération Lune. Then they discover that there are two moons in the sky. Since Kubrick is mentioned, the reference should be apparent: 2010; the sequel of 2001: A Space Odyssey (1968) directed by Peter Hyams, where two moons appeared at a pivotal moment in the film. Surprisingly the characters refer to Lars von Trier instead.

So instead of alluding to a film that actually has two moons, Puipa settles for a more recent movie that instead boasted two planets. A fact that sent my disapproval factor over the moon, and it never went back from there. My disapproval was over the moon-not me. Sure, there are numerous instances of attempts at self-referential works that get lost in the meta labyrinth, but this is one of the more pretentiously misguided examples I’ve encountered in a long time. We see interviews with a film director and follow theatre production rehearsals, but nothing ever comes out of it. The overall feeling is the work of a film student attempting to play with Eastern-European arthouse clichés.

Surprisingly enough, the director is 70 years old and has numerous films under his belt, none of which I’ve seen. He won the Grand Prix in Locarno in 1988 with a film called The Eternal Light (Vechnoye siyaniye 1987). There are around twenty other films as well, hopefully, more interesting than Cinephilia.