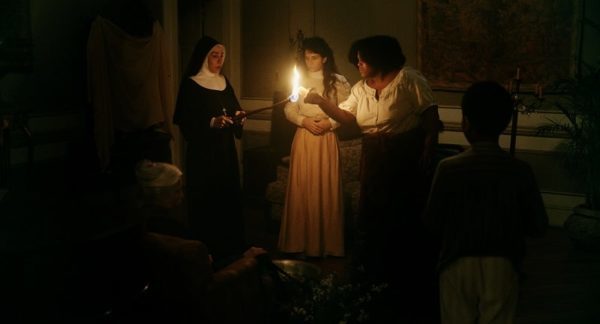 When I saw Marco Dutra’s and Caetano Gotardo’s Todos os Mortos at the Berlinale competition in 2020, I wondered about the title. Mortos means dead, but Tod is also death, right? What was the deal with the redundancy? Only after talking to a Portuguese critic who assured me that the title simply means “All the Dead Ones” I realized my fallacy, confusing todos with the German word Tod (death). Why did I confuse it with a German word? One reason could be that I was thinking about Jean-Marie Straub while watching the film. Even though he is from Metz in France, most of his works are in German, among them the Hölderlin adaptation, Der Tod des Empedokles (1987).

Past Present and Future

Since this was the 70:th edition of Berlinale, the festival decided to reprise the Forum section of 1970, including the film by Jean-Marie Straub and Danièle Huillet, regularly called Othon for convenience.1The actual title is Les yeux ne veulent pas en tout temps se fermer, ou Peut-être qu’un jour Rome se permettra de choisir à son tour. In that film, most of Corneille’s story about the Roman empire plays out on the Palatine hill, with modern Rome clearly visible and audible below. This was the film I was thinking about the most, and I rewatched it the day after I saw Todos os Mortos, where the future is constantly evoked in several ways that will not be divulged here.

The story of Todos os Mortos

The storyline in Todos os Mortos begins in São Paulo, Brazil in1899, where we follow three women in the Soares family. After the abolishment of slavery, a decade earlier, they are struggling with adapting to the new reality. Instead of waking up and smelling the coffee (the family used to run a coffee plantation) the mother, Isabel, wonders who will now clean her feet. The two daughters, Ana and Maria, have different problems. The latter is a nun, and she’s worried about Ana’s mental health since she claims to see the former dead slaves, walking around. The family manages to borrow a servant from their neighbour, Dona Romilda (Oliveira regular Leonora Silveira). However, her performance is not satisfactory

“Africa is big”2 Said ironically by Iná to the family.

Then Maria comes up with a plan to cure Ana’s ails: To let a former slave, Iná, perform some “African rites” She accepts, but merely because she has plans on her own. There are several other threads in the film that I won’t go into. Suffice it to say that the film didn’t land well with Anglo-Saxon critics. The common ground seemed to be that they were lamenting a lack of emotion. One reviewer complained that ” Instead of a heartfelt, sprawling epic, like Invisible Life, the result feels like a dry and endless lecture more than an involving human story about serious issues.” Another critic claimed that “with “All the Dead Ones,” they’ve added a hermeticism that blocks emotional involvement.”

O Passado e o Presente3 The title of the third film by Oliveira.

The above-mentioned objections are questionable if not borderline risible, for anyone who has Straub/Huillet or Manoel de Oliveira as favourite directors. The notion that films would have to be “Heartfelt and sprawling” is a rather jejune view of cinema, and who decides what constitutes emotional involvement? A closer look at Todos os Mortos, reveals references to both Straub and Oliveira. The casting of Leonor Silveira is hardly a coincidence. The exquisite cinematography of Hélène Louvart wouldn’t be out of place in a film by the Portuguese master4 Louvart is one of the brightest talents today. Not least her ability to vary her style. At the same Berlinale, Eliza Hittman’s Never Rarely Sometimes Always was shown with very different lensing.

So what kind of History Lessons is it that the directors bring to mind?5 History Lessons (Geschichtsunterricht1972) was Straub’s second film in colour) During an actual lesson, Maria compares Brazil to the Roman empire, saying that the latter went from republic to empire while Brazil went from empire to republic. The following sequence shows her reading a letter she sends to her mother. If one would like to stretch for references (as I always seem to do) the scene could be juxtaposed with Oliveira’s La Lettre (1999) sequence where a nun reads a letter from Madame de Clèves. Leonor Silveira plays the nun in question. The scenes are set 100 years apart. The films are not that similar in other regards.

The cinematic references are meant to illustrate what kind of work the directors intended to make. Bemoaning the fact that it doesn’t look like Invisible Life (A Vida Invisível 2019) (incidentally, also shot by Louvart), instead of aiming to understand why the films are different, makes it virtually impossible to appreciate it. Dutra and Gotardo aim to paint a picture of the changes in Brazil during the turn of the century while alluding to contemporary society as well on multiple levels. When Maria says to Iná that her songs invoke demons, she answers that they are rather forces that open paths towards more light. It’s not the last time in the film when light functions as a signifier of change.

Music plays a pivotal role in the film. Ana plays the piano and mainly plays European music. The former slave family and their friends, on the other hand, perform music from Angola and other parts of Africa. (I will refrain from comparisons to Oliveira’s Non (1990) Original music was composed by Salloma Salomao who also served as an adviser on the film. He served up numerous interesting points during the press conference at Berlinale. Todos os Mortos is a challenging work in many regards and all threads might not necessarily come together for every spectator, this one included. It postulates intriguing questions but all the answers might not be obvious before the next festival film commences.

Todos os Mortos might have had bigger chances of finding understanding critics, had it been screened in the Encounters section or Forum, instead of the competition, since it would have come with different expectations. In any case, It is a stimulating work from a country that’s been prominently displayed in festivals during recent years. Bacurau is only one example. Dutra’s and Gotardo’s film is highly recommended for anyone interested in demanding and rewarding cinema.