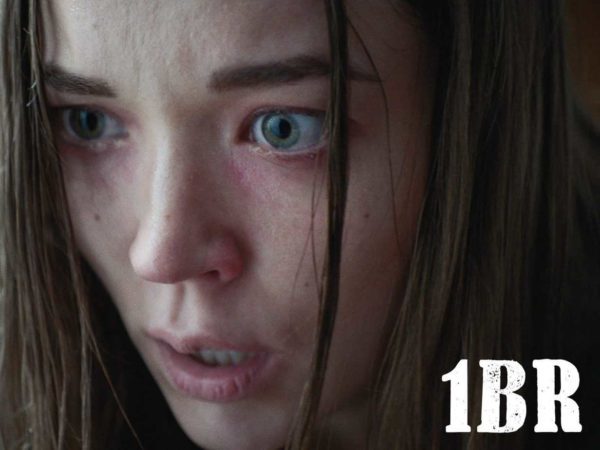 1BR, or Apartment 1BR as it’s called with an untranslatable pun, is the debut feature of David Marmor who also penned the script. It involves Sarah (Nicole Brydon Bloom ) who moves to Hollywood in pursuit of her dream to become a fashion designer. Meanwhile, she works as a temp in an office with a harassing boss, to her father’s chagrin. She feels a bit to meek and her colleague, Lisa, tells her to vag up. To her delight and surprise, she gets the apartment she applied for. The confirmation call comes when she is in her cubicle in the office landscape. If one is so inclined, that could serve as a metaphor for the building she is moving in to.

After settling into her new apartment Sarah attends a barbeque where she is introduced to her new neighbours, Jerry (Taylor Nichols), who she already met at the open house, says that they like to make the place feel like a neighbourhood. There’s also Lester (Clayton Hoff) who presents her with a book titled The Power of Community, with the words “You should read this It changed my life.”The group seems to do their best to make Sarah feel welcome. Her closest neighbour Brian (Giles Matthey) claims, he was the one who put in a good word for Sarah. Later he greats her with an elbow bump, which feels inch-perfect during Covid-19 times, even though the film is from 2019.

Brian seems interested in Sarah. Could something happen between them? Will her career dreams come true? And what are those noises that keep her awake at night? Obviously, things are not as rosy as they appear to be, and the community life will turn out to be way more than Sarah bargained for. The fact that she smuggled in a cat even though no pets are allowed will only be the first of her problems. When Sarah visits the former actress Edie Stanhope, she refers to Lester as creepy. Edie replies “He’s not creepy, he’s just a little sad”, thus introducing a less superficial way to look at the people we meet every day.

The Horrors of 1BR

Marmor directs with a confidence that is quite impressive, not least for a first time director. The film is difficult to categorize. It feels like a thriller but has strong horror elements. The director never wallows in the violence, and I guess a viewer looking for pure horror would be somewhat mystified. Still, there is no lack of truly shocking moments being rendered very effectively. Shot on a low budget, the production has a back story that would make a great film in itself, involving a fire and actors leaving at the last moment. Still, this film is a reminder that the greatest asset of a film is ingenuity. The film constantly defies its low budget to present something visceral.

The Beauty of 1BR

I’ve been trying to understand why I like the film as much as I do. One of the reasons could be that the depiction of the community is so accurate and that it points to the fact that life in an apartment block is not that far from a cult as far as the motivations are concerned. The note Sarah gets about her cat, “Some people are allergic, you selfish bitch!” is not that far from a note you could get in a Swedish laundry room. If the film brings to mind works like Rosemary’s Baby (1968), it also evokes a film such as The Parallax View (1974). That is among the highest praise I could give to any film.

1BR is available on Netflix in Canada and the US. In Sweden, it’s available at several streaming outlets through Njutafilms.