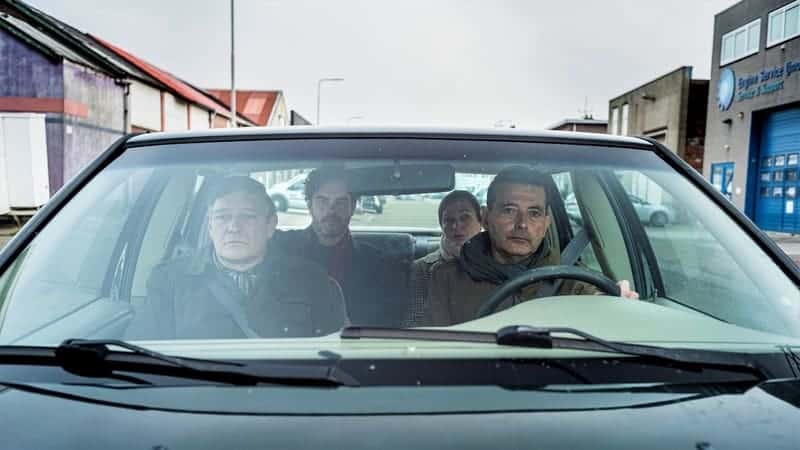 Alex van Warmerdam has been a favourite of mine ever since I saw his debut feature Abel at the Gothenburg Film Festival in 1987. He is not the most prolific director since his latest film is his tenth in 35 years. Nr. 10 was initially a working title that would eventually become the actual name of the film. After an initial shot of ocean waves, we meet Marius (Pierre Bokma) at home. His wife has a severe illness, and her coughing keeps him up at night. We see him carpooling with some people who are all part of a theatre group. Marius can’t remember his lines during rehearsal, and he blames his wife for that.

At the same time, he is angry about how he is treated on stage by fellow actor Günter (Tom Dewispelaere), who blocks his way. Sure, it’s part of the play, but doesn’t Günter enjoy it a bit too much? It turns out; it’s not the only thing he is enjoying. He is having an affair with the director’s wife, Isabel, who is also one of the actors in the play. Something that he goes to great lengths to hide. When his daughter Lizzie visits, Isabel has to hide in the bedroom. Does she still suspect something, and why is she going around secretly filming her father? What is going on?

Whenever we see the colleagues going to work in the car, there is an eerie feeling that will be recognisable to anyone who has seen a Warmerdam film before. They don’t exchange a word, and the framing accentuates the feeling that something is off. There is always a palpable tension between everyone involved during the rehearsal, including the director. The scene they are rehearsing takes place during a wake. A group of people gives a toast and says, “To the passing of Angela Mulder. May it benefit us all”. That’s when Gunter blocks Marius’ way, and the animosity escalates between everyone involved, and it will only get worse in unexpected ways before the premiere.

The premiere performance begins with Marius reciting, “Nothing has changed. The world is still the same. Turn the corner of the street, and all is as it used to be, or oddly enough, quite different. We are confused by all we see and all that’s whispered in our ear. Do not listen. Close your eyes. All the world is not a stage. Take a brick. Crush your watch. Don’t be a seagull behind the plough.” Then the performance comes to a sudden end. Meanwhile, a catholic priest is following what is happening from Germany. What is his connection to the theatre group? Who is the stranger who whispers a word in Gunter’s ear on a bridge?

With all the questions posited, it is not obvious where the film will turn. Towards the end, another toast is proposed that may echo the one we saw during the rehearsals. If the movie is full of questions, the style of the work is unquestionably one of a director with a complete command of the material and his craft. Tom Erisman’s cinematography shines once again in his sixth van Warmerdam film. Every shot has a cold precision to it, and the off-kilter ambience of the film is, ironically, perfectly balanced. The deadpan comedy, one of the director’s trademarks, is present here and ideally served by the actors, some of which are recognisable from earlier van Warmerdam works.

There are few directors working today who match the formal rigour displayed here. The only ones that come to mind are Ágnes Kocsis and Lucretia Martel, who merely made seven features between them. Like their works, this is a film that repays several viewings. Nr. 10 is the director’s first film since Schneider vs Bax in 2015. Apart from Grimm (2003), this is the only one where the director doesn’t appear as a character. He did compose the music, though, for the fifth time. It is a contender for the best of the year lists, and it would not necessarily stay at position nr. 10.