An interview with György Pálfi 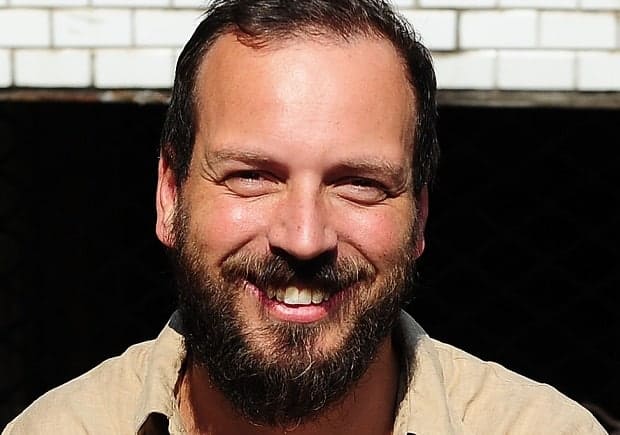 I watched György Pálfi’s latest film Perpetuity (reviewed here), at the Black Nights Film Festival in Tallinn. Afterwards, I had the opportunity to talk to the director, the screenwriter Zsófia Ruttkay and actress Júlia Ubrankovics. The last time I met the director was in 2014, and then I asked him about his vast Toldi project that was under development. That is reflected at the beginning of our conversation.

As I understand, Perpetuity has been in gestation for a very long time, since 2015. Could you tell me how it started and why it took so long to get to this stage when it’s actually screened here in Tallinn?

György Pálfi: Yes, it happened after Toldi, a huge production. We wrote a script, got money for the pre-production, and then didn’t get money to shoot. And you know, I am a filmmaker, and for me, that was a very frustrating period just developing without shooting. And in 2015, when the project was cancelled, I said enough, and I would like to make a film this summer.

So how did you proceed?

I called my production manager friend, Zoltan Galambos, and asked if he could somehow gather a crew in the summer. He had time in July, so I said let’s do it, and we started developing without any money. The goal was to make a movie without script development, co-production or any pre-production, just do it, and that is how we started. The prerequisites were a few small sets, a few actors and one month to shoot. It would be a film without money, just for the experience and the flow. It was a great experience, and I looked for my “partners in crime” to make the film. I called the actresses like Júlia, and I invited a very good cinematographer.

Tamás Dobos, yes, It was the first time you worked together?

Yes, this was in 2015. And four additional days last year. The thing we shot in 2015 fit very well with what we added five years later.

I saw Natural Light recently, which was lensed by Dobos. It was shot years later than Perpetuity. At the time, he had only made a few shorts, so what was the reason that you chose him?

We wanted to create a film where the story is very miserable, but the pictures are beautiful. So to create tension, but it’s very difficult to make beautiful shots about miserable things without it becoming kitsch. Tamás (Dobos) can create beautiful pictures without kitsch. I don’t know how he does it. The circumstances were not good. We only had two lamps, so we shot as much as possible with natural light.

And then in between, His Master’s Voice happened in 2018.

Yes, I think, three years ago, it premiered in Tokyo.

The working methods in the two films were extremely different. With Perpetuity, we didn’t have a script, just the treatment, the actors and the location. Day by day, we made changes in the treatment. Depending on the interaction between the actors. Like between Júlia and Tamás (Polgár) who have a special relationship. They love and hate each other simultaneously.

Júlia Ubrankovics: I don’t hate him. I love him.

Zsófia Ruttkay: I would like to add that it was very interesting that in the treatment, there was a love triangle. During the editing, we realised that it became a square because of the two male characters, Ocsenás and Béres. We realised that they are in love in a particular way as well. Due to that, we needed to change the story that led to this.

So the film changed perpetually, in an organic way?

Z.R.: Yes, it was very organic, and it creates a very nice flow to make a film like this.

So the film was finished this year?

G.P.: It was finished last week. We saw the film for the first time at the screening yesterday!

What was that like to see the finished film for the first time with an audience?

We worked the whole time with a small screen, so it was a pleasant experience to see it like this. I felt very content to see how well the shots fit together because the last six years were quite confusing, but in the end, it worked out pretty well.

I understand this film is based on a short novel by Sándor Tar, which I don’t know so much about. Could you tell me a bit about that novel and why you chose it?

G.P.: I chose it at university.

Z.R.: Yes, it was a very old idea to adapt this novel. And when we decided to make a movie very quickly, we checked our old sketches.

G.P.: I talked to him at university and asked him to adapt this novel. He had a heart for the poor people and saw their problems. He wrote in beautiful language with very long sentences. It may not be correct grammatically, but his style was very special. And these people in the original novel live on one street, and it is about how they connect. It’s amazing! The novel is called Our Street.

Would it be fair to say that the style and the cinematography are more important than the storytelling itself? Or maybe it’s just always that way for me.

G.P.: I think the story is really important, not least for the actors.

J.U.: When you first called me about the script, I was so drawn to it because of the character relationships because of the love story that existed underneath that, even though they are so poor and miserable, and all of that. There’s a love that connects them in a really strange way. And I found that very poetic and beautiful and worth talking about.

Talking about your part, how did you approach the role?

J.U.: It was difficult to prepare because there were no lines in the script, and I remember after the first day of shooting, I went back and said, “let’s do it again tomorrow in a different way”. Remember?, because I wasn’t really happy with it. On the first day, we improvised, trying to find how this character exists, what she does, how the interaction was, what her being is, and what she is capable of.

So you found it demanding?

It was not just demanding because of the part, but how these men handled Margitka. I can’t take myself completely out of it. So I needed to be humble, trust them, and go there where it didn’t hurt me, but I thought it served the movie.

What is the situation like for cinema and arts in Hungary now? It doesn’t look good from the outside.

G.P.: It’s not a good situation, politically. The system basically favours the politicians and their friends.

I also heard about what’s going on at Budapest’s University of Theatre and Film Arts (SZFE) and how the politicians are trying to overtake it.

J.U.: It’s important to point out that the scene in the film of the demonstration which a sniper is aiming at were actual demonstrations at that same university.

The film is more topical now than when it was shot in many ways—considering what is going on with Belarus and the E.U. border and other things.

J.U.: Yeah, I think it’s very timely. In 2015, this whole idea of a war with this dystopian world with mutants and zombies and everything falling through the sky was sort of far-fetched. In 2021 it feels like we’re heading there.

So finally, do you have any new projects, Júlia?

Do you want to direct something, like a documentary?

J.U.: In a way, yes. When I started I wasn’t thinking about directing. I just wanted to understand what the country is about because of the political situation, with the pandemic at the same time. I wanted to find some sort of belonging because the news were so in opposition to what was happening around me. So I thought, okay, let’s see this country. It’s huge. I decided to be a pilgrim to see how people live in different states., how they feel and what they are about. So I stayed in many situations with all sorts of people and interviewed them. I got connected to America in a very different way to be 45 days to do the huge round,

Both north and south?

J.U.: Yes, I went from Los Angeles all the way through the south to Savannah. And I flipped around, and I went up to Chicago and Minneapolis, where George Floyd was killed just a month before. And then I went back through Colorado and Utah, to Vegas, and then Los Angeles. I’m working on the editing, putting it together. And I hope that it will be finished soon and that there will be more opportunities coming as an actor.