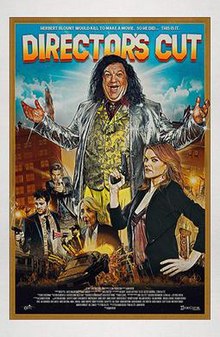 Adam Rifkin is a director whose most interesting film, so far, might be Look (2007), where the action is largely captured by security cameras. Penn Jillette from Penn & Teller saw the film and immediately decided that Rifkin was the perfect director for his screenplay named Director’s Cut. He had tried to pitch the project for years without success. Now a new idea came to him. Since the film is about a character who weasels himself into a film via crowdfunding, why not attempt to fund the film that way as well? So a Fund Anything clip was made, and they managed to raise more money than they asked for.

The main character in Director’s Cut (2016), Herbert Blount, is portrayed by Jillette himself. He has paid to be involved with a murder story called “Knocked off” by contributing to a crowdfunding site. The film in question is about a man who goes on a murdering spree while emulating infamous murder cases. The case is handled by Godfrey (Harry Hamlin), Reed (Hayes McArthur), and most importantly, for Blount, FBI agent Mabel, portrayed by Missy Pyle. The film looks like a knock-off on films like Se7en (1995). See what I did there? “Knocked off” is a Knock-off! That kind of “funny” observation is what Herbert will deliver throughout the film. on his commentary track.

He claims that the director who made the film is a hack and that we will be presented to his director’s cut instead. A friend of his claims that it’s a fan edit, but Herbert assures us that the term doesn’t apply here since he is a director, not a fan. He points out things that are wrong with the film, like continuity errors, uncertainties in the storyline and other things. On the other hand, he will fawn over Missi Pyle any chance he gets and adds slow motion to her first appearance. It will soon be apparent how obsessed he is with her, and things will get out of hand.

The Director’s Cut is out

Anyone used to Penn Jillette’s usual jovial persona will be surprised here. That he is not a trustworthy narrator goes without saying. We will see not only scenes from the film but also Herbert hanging around on the set, whether it is reading the line he paid for or just being a nuisance for everyone involved. Suddenly we will see him appearing in scenes he is not supposed to appear in. Then we see footage that was clearly shot by Blount himself. First trying to establish contact with Missy, but later plain stalking her in different ways. Eventually, his delusion crosses all boundaries, and we will see that he won’t stop for anything to achieve his version of the film.

I mentioned this work when I wrote about Deerskin. They share the theme of the filmmaker being consumed by his work. In both cases, the protagonists are only directors in their own minds. Rifkin’s film goes much further when it comes to the meta-levels. It treads the same ground as Peeping Tom (1960) or, if one is less charitable, F/X (1986). The film received mixed reviews. Some felt that it didn’t live up to its premise, but others found it just as deliriously nutty as the writer describes it in the clip. The juxtaposition of an artist’s obsessions and toxic fandom (which might be a tautology) provides an intriguing extra layer with numerous implications.

From what it looks like, Herbert is a pathetic loser. He seems unaware of his ineptness and feels like someone who would live and work in his mother’s basement, like Rupert Pupkin in The King of Comedy (1982). It turns out that his mother is dead and that he inherited her house. He labels the soundproof cellar his studio. That is the location where he applies his special effects to the film. Those are a sight for sore eyes in the sense that your eyes will get sore from seeing those cheap, garish effects. On the other hand, he doesn’t sound that different from many podcasters or YouTubers.

On a darker note, Herbert Blount may not be so different from the movie moguls in Hollywood or elsewhere, Harvey Weinstein being the most obvious example. The main difference between those and Blount is that the former have a lot of creative talent working for them, as well as various legal representation. The film was shot in 2014, so that was before the Weinstein scandal erupted, for real. One has to remember that for a long time, he was hailed as a hero by several famous actresses, one of them even calling him “God”. Rifkin’s and Jillette’s film is quite entertaining while at the same time throwing some light on the darker corners of our minds.

Director’s Cut is available at Vimeo