Do you know Lívia Gyarmathy? 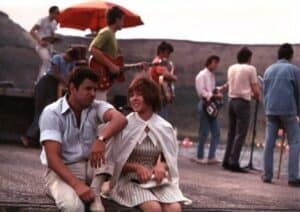 Do you know MaNDA? If not, that’s hardly a surprise. It was the name of a public institution that restored and released classic Hungarian films. The name is not in play anymore, but since this text is about Ismeri a Szandi Mandit? (Do You Know Sunday-Monday? (1969), I couldn’t help but use the name. It’s the debut feature of Lívia Gyarmathy. A name that is hardly a household name today. She is probably best known for the masterful documentary RECSK 1950-1953, which she directed together with her husband, Géza Böszörményi, in 1989. The film deals with the camp for political prisoners that existed in the early fifties. Gyarmathy would return to the same topic in a fictional work called Szökés (Escape) in 1997.

The Obscurity of Lívia Gyarmathy

Otherwise, her works are not that well-known or even readily available. My first encounter with the director was when I saw Vakvilágban at a film festival in 1987. I liked it, as I tended to do with many Hungarian films at the time, but it would take a long time before I could see other Gyarmathy films. Ismeri a Szandi Mandit wasn’t available to me until it was released on DVD. The restored version boasted gloriously restored cinematography, courtesy of Támas Somló, who shot Jancsó’s The Confrontation (Fényes Szelek) the same year. Not that they look alike. A possible description of Gyarmathy’s work could be that it looks like Red Desert (Il Deserto Rosso 1964) made by Jaques Tati.

Tati is an evident influence, which Gyarmathy and Böszörményi (who wrote the script) openly acknowledge. The whimsical structure with abundant visual gags, combined with exaggerated sounds, make the comparison inevitable. Simultaneously the film has a grotesque tone that wouldn’t be found in the French director’s films. An ingredient that was relatively uncommon in Hungarian cinema at the time, as well. The film’s setting is a chemical factory, where young Juli (Ila Schütz) will work during the summer since her father has a position there. At the same time, Piroska (Edit Soós) joins the factory where she was once fired due to alcoholism. We will follow both, and also the men working there.

There’s not much more to the “plot” than that. The studio head, Janós Herskó, gave Gyarmathy a degree of freedom. His main objection was the choice of Schütz, but he eventually gave in. The factory is, like many others during the communist days, not very efficient. Juli will get a crash course in the difference between the ideals she read about at school and the crass reality. When she asks her boss for an essential and difficult task, he tells her to make drawings of the pipes. In this regard, the satire is similar to Sound Eroticism, and in both films, we see men ogling women in the shower instead of working. Actually, everyone seems to do anything but work.

The building blocks of the film is not a story. It’s rather that the film emulates the indolent ambience at the chemical plant. Gyarmathy and her husband worked as chemical engineers, and they drew from those experiences to build the structure. Some of the sight gags are similar to what Roy Andersson would achieve in You, the Living (Du Levande 2007). When we meet Piroska’s alcoholic mother, the former’s drinking problems are deprived of any hilariousness. Thus, in between the coarse, satirical humour, some sad observations are implied. Ironically, the film’s tone was a more significant issue for the Film Board than the political satire about Soviet-style modernisation. Another sign that this was something unusual in Hungarian cinema back then.

The director had some resources at her disposal, thanks to the studio and János Herskó1,János Herskó would move to Sweden in 1970, where he became a teacher and later principal at the Dramatic Institute. and she used them well. There are a few moments when the film lapses into the same kind of idleness that it portrays. Still, most of the short running time, it’s a sharp, keenly observed work that manages to satirise society, as well as demonstrating what women have to do to cope with a man’s world. What does the title refer to? “Az Egy Világszám!”2 It’s a World Hit, referring to a song that appears in the film.