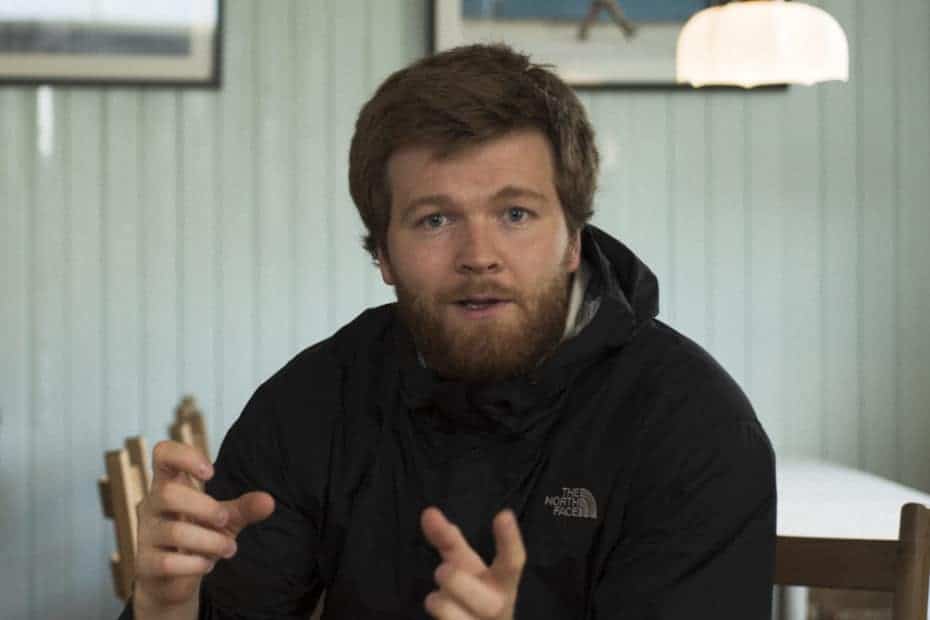 I saw Anders Emblem’s sophomore film, A Human Position (review here) during the IFFR 2022. I was able to interview him about the film, as well as his first feature, Hurry Slowly.

1. What was the origin of Hurry Slowly? The topic of autism is handled in an unusually accurate fashion. Is there a particular backstory there for you?

Until recently, my main profession was social work at different care homes for kids and youth with mental and developmental disorders/intellectual disabilities (ID). It was a job that suited me well, as my experience was less like a job and more just going somewhere where I help and support them through the day. I think many people would say it’s a tough job, but it’s all relative.

So it’s not all easy, and you meet a lot of different people with very different backgrounds. What always stood out the most is how often the lives of the families are so defined by having a child, grandchild, or sibling born with ID. And often, parents are devastated because not only do they have a child that needs constant looking after, their whole lives, but they also have to fight the city and government to get the care they have a right to get. A lot of families I met are broken up simply because of exhaustion.

The final key to that film is how the siblings often grow up with brothers or sisters that get most of the attention for obvious reasons. My experience is that siblings simply become the best people. Everyone I’ve met is so nice and patient, and I guess they had to go through a lot to get to that point.

I then simply added the notion of personal freedom into that and how people in that situation deal with it.

2. Amalie Ibsen Jensen stars in both films, but I don’t find any other credits for her. Does she do theatre, or is she an amateur?

When we shot Hurry Slowly in the summer of 2017, she was fresh out of theatre school at Nord University. From then until we shot A Human Position, she’s been doing a lot of theatre, touring all over Norway with various plays.

It started quite basic, where I looked for actors and musicians from my region, in and around Ålesund (known as Sunnmøre). She stood out with a very expressive face and sent me a self-tape where she played one of my favourite Nick Drake songs. She is actually quite energetic and comedic as a person and actor and containing that for these saddened, and contemplative characters might give them an extra dimension. Perhaps a glimpse into who they are deep down if life hadn’t happened to them the way it did.

Despite my inexperience with directing actors, it was very easy to work with her. We decided quite early to go on and make A Human Position together.

3. What was the origin of A Human Position? Did the refugee case have any basis, in fact, or is it merely a metaphor of sorts for Asta getting a sense of duty and being able to do something worthwhile?

There are various elements that sort of spark the bigger picture when I start a new project. I knew Amalie would be the lead again, I knew I was going to use the apartment I was renovating, and I knew it had to deal with a sense of injustice. At the same time, I learned more about the history of industrial furniture design in this region and found a way to integrate that.

I kept seeing all these stories in the media about asylum seekers being returned after a decade or even two in Norway. It baffles me beyond belief that we so easily ruin people’s lives by minor flaws, perhaps done by mistake or desperation ten years ago. I then started looking into the process of seeking asylum, and what I found is that it is all so incredibly confusing and intricate. It is almost as if it is made to be this difficult for us from here to understand cause a lot of it is pretty grim. Especially when just fleeing a war etc. So I wanted to present that aspect to it, the confusing complexity.

I had difficulties connecting the “main event” in Asta’s life and the asylum seeker’s case, but I came down to the feeling of injustice. It’s about getting a new perspective and seeing society differently. So I think she connects to that injustice, which gives her a sense of doing something worthwhile. The film definitely leans into that, as she struggles to get back to life as she knew it. For me, it’s simply a metaphor of what a new experience or artwork can do – it can give you a new perspective. And that can again make people nicer, even if ever so slightly.

The visual style of Anders Emblem

4. The cinematography in A Human Position (in particular) is stunning. How did you and Michael Mark Lanham approach the film’s visual look? I’m talking about the interiors with the angular images and the exteriors. How vital was the town’s architecture when it comes to both the themes and the look of the film?

I’ve developed a very specific way to create images. Some might call it OCD. I had to make it clear right away that I didn’t want to move the camera and that I wanted a visual lightness to the images, as a contrast to Asta being a bit heavy in the frame. Films seem to think a sad character should have rain and darkness, but I prefer the world to be light and beautiful as it plays with that old visual trick. Michael liked the approach, and he was quickly on board, suggesting framing based on how I prefer it, so we quickly spoke the same language and communicated well. Quite a seamless collaboration, which is how I like it.

I love to find simple symbolism in the city, and I love repetition as a way to make an image mean different things at different times in the film. I struggled a bit with how to use the city, and many ideas disappeared along the way. But especially the walking shots at night is a tool that speaks to my basic philosophy of giving the viewer “nothing” for a little while. This way, they can focus and overanalyze what they see, what they have seen and what will happen next.

5. As a cinephile, I thought of several other directors while watching the film. I mention Chantal Akerman in my text. Is that a director you’ve watched? Are there other directors/cinematographers that have influenced your work?

I’ve only watched Jeanne Dielman after we shot A Human Position, but you can clearly see elements of similarities. I have to admit I’ve lost a bit of my cinephilia the last 4-5 years, but I hope to regain it soon. I have tons of films and books to catch up on.

I think I was first shaped by American independent film, and I think my first thoughts on tableaus and the way of framing come from Wes Anderson. My films are now far from that, and I now lean on the likes of Kelly Reichardt for inspiration. I read someone calling her films “quiet cinema”, and I very much identify with that.

I remember when Ida (Pawlikowski) was released in cinemas in Norway. I saw it right before a year-long trip around the world, and it made me confident in the possibility of going that route after making a few failed short films testing out this language. I’m not saying I have figured it out yet, but it makes sense that it takes some time to learn a cinematic language like this.

Ozu’s films are also heavily watched just to reflect on how I want to differ from what he made. It feels like his films are the birth of this type of direction in cinema (for me), even though I usually look to more recent films for inspiration. It’s something about navigating what is out there, what is possible.

6. It’s not 100 % clear what Asta’s trauma consists of, even though the film provides several visual clues. How important was it to keep this ambiguous, and how did you manage to find this balance between neither being too explicit nor too vague?

This balance keeps me up at night, and I struggle with it. But I suppose that’s the point. As we speak, I honestly can’t remember how I handled it. In the end, I just had to go with the accumulation of all I know about cinema, the language, audiences etc. – the gut feeling.

But it probably comes down to how to structure and build a film—the engineering of it all. I am very aware of how I think the form and style are interpreted, and for me, the story and content aren’t separated from the cinematic language as a whole. So with this quiet language without a lot of plot, I think I can create a few moments with minor and major reveals for the viewer to latch on to. And these moments could have an emotional impact if my calculations are correct.

The ambiguity probably also comes from a fear of clichés and shifting the focus to the things after the drama or the stuff in between. There are enough people who make the explicit stuff, so why not try to be a bit more implicit.

7. Finally, do you have any upcoming projects planned that you could talk about?

After losing faith in it all after shooting this one (I lose faith in every production), I’m finally thinking of new stuff again. I have a handful of good ideas I keep adding to, but my method so far has been not to develop and write until I have a clear idea of getting it made.

But since you ask, Amalie and I will make a third film in this no-budget fashion. I’m thinking of branding it” the last film in the Hapless Trilogy”, haha. But it makes sense. Again, a character who is in a difficult situation without herself being the cause of it. Otherwise, I want to make a film set in a care home. But just thinking about its logistics makes my brain hurt, so it will have to be done with a production budget of sorts. For good and bad, I think it’s a part of society that is both interesting and important to look closer at.