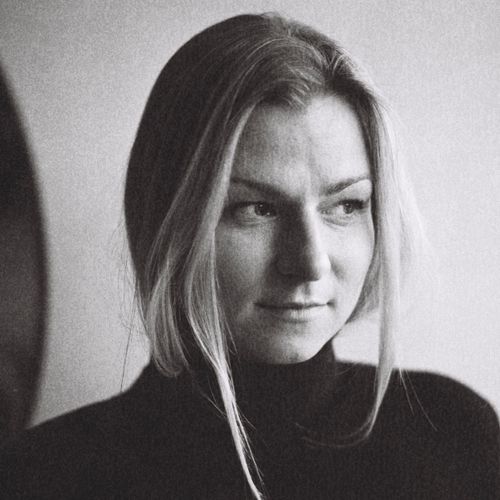 Remember to Blink (Per arti) is the first feature by Austėja Urbaitė. I saw the film at the world premiere at the Warsaw Film Festival (reviewed here) and was able to conduct an interview with the director.

So, to begin, I was told this was made with Lithuanian money but was it, in fact, a co-production with France?

It was a minor co-production with Italy because we went for three days to shoot some mountains to be able to create the world around the house. We didn’t manage to get the co-production with France, so we made it with a very small Lithuanian budget.

When did you shoot the film? With COVID, it must have been difficult.

I think it has been two years now. I’m losing track of time since when we were finishing the editing and working on the sound, we were still waiting to go to Italy.

So, the scenes in Italy were the last ones you shot?

Yes, it was difficult because spring came really late that year, so it got delayed, and eventually, we had to combine shots in Italy with scenes taken in Lithuania and make it look like the same place. So we had to skip one year of festival rounds.

So if it wasn’t a French co-production, how did the French actors come on board?

We were supposed to shoot in France but didn’t get the funding. I rewrote the script for a small budget because we couldn’t make it in France. I had a good casting director (Laure Cochener), and the interesting thing was that the first time I went to France for casting, I met many brilliant actors, Belgian and French. It’s one of my favourite memories of the process.

Then, two days before I was supposed to fly there for the second time, the quarantine began, and everything stopped. Then I had to do my casting on Skype. It was difficult for the actors to understand how to do it with a computer. It was a heavy task. Then with the restrictions, more problems were raised with the actors’ availability and other things.

So how did it feel? Are you happy with the result, or did you think you had to compromise? Make fewer takes, for instance.

I’m happy with the result. I think we got the most of what we could, considering the circumstances. It took me a long time to let go of the original visual concept of the film, but I never compromised with the actors. So it varies from scene to scene. There are those where we just talked before, and then it’s completely improvised, but we had to do it eleven times in one scene.

Because of the actors, or was it a more cinematic aspect?

It was a reaction of one actor to a specific line, but the cinematographer (Julius Sičiūnas) wasn’t happy with the camera movement either. Eventually, we managed to make it click.

So the thing with Lithuania and France. I’ve seen Bridges, which also has a connection to France. Is that personal? Do you have a link to France in some way?

With Bridges, it was a coincidence. The original story had nothing to do with being from another country or anything. It’s just that when I found the actress (Clotilde Regaud), I rewrote the script. It was always the same story of her deciding to leave and change her life, but the whole thing with France came from the actress.

I thought maybe you had some connections to France.

Does that also apply to French cinema, and do you have any specific favourites?

One film that influenced me, and I thought that I wanted that feeling in my film, was Rivette’s La belle noiseuse. Eventually, it didn’t happen because we had to change everything, but I’ve seen that film so many times.

Yes, I haven’t seen the short version. I really think it’s worth spending all that time watching Frenhofer paint. It made me think about what art is and what it’s about. I think every young, ambitious person looking for fame, or whatever, should watch it.

The dynamic between Jaqueline (Anne Azoulay) and Gabriele (Dovilė Kundrotaitė) is interesting and quite ambiguous. We are never sure which direction it will take.

One of the main goals was that throughout the whole movie, I didn’t want to tell the spectator which side to choose; I just wanted everybody to follow the story and have doubts at some point.

That’s very refreshing, but it might make the film more difficult to sell, especially in the US. They typically want it to be clear who the villain is and who to root for.

And that is the choice of the director. I think that was one of the reasons why we didn’t get funded in France because we always got the same question. Who was the main character? And I think that the movie is about reflecting on your judgment and how you perceive things, and if I choose one, I break the whole essence of the movie. So, it was better for me to have a small budget and struggle through it but still keep that rather than make it easier to sell.

The style of Austėja Urbaitė

You worked with the same cinematographer as in Bridges. So how did you approach the cinematography connected to the topic? In the press notes, you talk about human nature, but the film also has a lot of literal nature.

I think it was essential for us to feel this, these people being so small, against the power of nature. I just wanted their small problems next to those big, powerful waterfalls and mountains. The problems seem so big when you focus on yourself, but I wanted to have that contrast. That’s also why I had that many wide shots as a contrast to the close-ups of their faces to show how small we are.

Yeah. And also, again, I connected Jaqueline with the mountains and Gabriele with water. We would also look for ways to set the camera movements after the characters, where it sometimes becomes more active and vivid around Gabriele. On the other hand, the camera is more fixed when it focuses on Jacqueline. So, I think I incorporated nature into the way the camera moved at some point.

And that implies Jaqueline’s need for control when the camera is more static.

Yes, but at the same time, we wanted a “breathing” feeling, but yes, the purpose was to have more like a mountain thing with Jacqueline and more vividness with Gabriele, but not simply for specific shots, but rather for who’s taking the attention at that point in their story. Who is, sort of, taking control of what’s going on, or taking control? That character’s element affected the way those scenes were shot.

What about the editing process? That wasn’t someone you worked with before?

No, it’s a girl that is a director (Gabrielė Urbonaitė), and this was her first feature editing job, so we did it together. We clicked straight away. I will be very honest about the editing. Before going to the set, I knew that having children and wanting to show the story in such a subtle way would happen that I might get things earlier or later than I planned. So, I deliberately made costumes, makeup, and lighting change each scene, so you don’t know exactly how time passes and that you are free to edit the story, not the scene order. A lot of the editing happened, not while writing nor during the editing but on the set.

What about the score? What was the process like there?

That was also someone I worked with for the first time, Domas Strupinskas, and again it worked perfectly from the first day. My initial feeling was that I didn’t want any music.

Not at all, or rather not the emotional kind that tells the audience how to feel?

The approach was to have music that would be like the wind. That’s literally what we said.

Yes, like nature, it should spring from the trees and the house. Some people told me, “I only heard music during the credits.” I love the idea that you “feel it but don’t hear it”. Or, you hear it, but it doesn’t impact how you perceive the film.

It’s merely part of the soundscape.

Yes, it’s part of the world rather than a single track.

Would you say that the formal aspects of filmmaking are more important than telling a story?

I think that for me, it’s the feeling and the emotion that drives me, and that’s what I want to evoke in people, and that’s what I love when I watch a movie, but there are so many different ways you can approach that. It could be through the actors or the overall atmosphere. Many symbols in the film are inside my head, like the red ball, but If I had to choose, it would always be about the feelings of the characters rather than what a symbol means.

Apart from La belle noiseuse, have you seen other Rivette films?

No, I’ve been trying to find La Religieuse because I love Diderot’s novel, but I haven’t been able to find it. Then, when I reread the novel, I wouldn’t say I liked it as much.

Time is quite important in his films and sometimes becomes the matter of the films.

Yes, it’s funny about the length. Sometimes you see a film, and you think before, “Oh, it’s so long”, but in the end, if you haven’t suffered through the film, how would we feel his relief? Information is just information.

It was funny when I saw Sátántangó. When I saw it was divided into four parts. 1Tarr prefers the film to be screened in three parts with two breaks. The first part felt normal. The second part felt like ten minutes for me. The third part felt normal again, but the end felt really long. It was exciting to experience the relativity of time. When it comes to The Turin Horse, I saw it in a group, and many felt that it was sad and depressing, but I came out so happy and full of life.

Do you have other cinematic favourites?

I’ve always loved Peter Greenaway, and I always will. I’ve seen the Cook, the Thief, His Wife, and His Lover many times. I love The Pillow Book, as well. I like Les amants du Pont Neuf by Carax. The King of Comedy, as well. I can’t really pick one director, but I rather like films here and there.