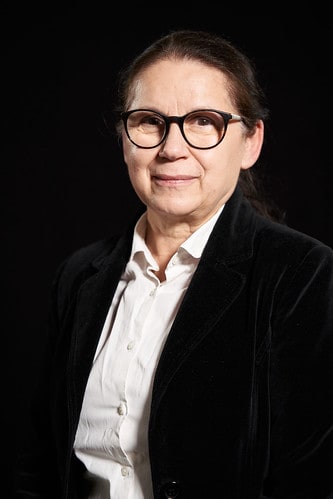 I met Ildikó Enyedi during the Black Nights Festival in Tallinn, where she served as the jury president of the competition. I wanted to talk about her works made after the 18-year-long gap since Simon the Magician (Simon Magus 1999). The return to the Berlinale with On Body and Soul (Teströl és Lélekröl 2017), which won the Golden Bear, and The Story of My Wife, which opened at Cannes in 2021.

I attended the premiere of On Body and Soul when it was screened as the first film in the Berlinale competition in 2017. It wasn’t easy to know what to expect after all those years. How was the experience for you, and how did the project start?

We started working with a very small budget. I told my team that this film probably wouldn’t be screened at any major festival. That it’s a simple film that doesn’t tackle any current topics, but this is the nature of the film. Luckily, I had a very dedicated crew who understood what the project was about.

You had Tibor Mathé as the cinematographer, who you already worked with in Terápia.

Yes, we made eight episodes together. It was good to have him, not only for professional reasons but for the kind of person he is. Then we got the invitation to the Berlinale early, already during the summer of 2016. Still, we had to keep quiet about the film going to the Berlinale, which led people who knew that the film was ready to wonder why it didn’t go to any festivals that year. Was something wrong with the film?

Were you sure about the film’s qualities yourself before the Berlinale?

I was sure about the film, but I was absolutely unsure or even sceptical about how it would be received. Would the peculiar sense of humour in the film work? Would they go with the risky balance of the film, and so on? It was our test screening, in a way.

Did you feel it went well during the screening?

Very much, even the silence at the beginning. I felt relieved and had the sensation that other people reacted the same way as me.

The film has a lot of humour in it, and some of it is quite crass and frank. I was thinking that could appeal to Verhoeven, who was the jury president. For me, that is a Hungarian sense of humour, also found in films like Open and Just Sex and Nothing Else.

Actually, it’s the first time I hear that it would be a Hungarian sense of humour.

I remember he said that the frankness was a bit surprising to him. Not only when it comes to Mária but also in the scenes with the psychologist. That there was a frankness that was unique among the competition films.

Réka Tenki’s role, yes. What about the leading male role, Géza Morcsányi? He never acted before, did he? How come you chose him for that part? He is a set designer, right?

Yes, he is. No, it’s a monolithic role. Mária is going on a big journey, and finding the right guy for this role was essential. I know most of the actors in that age range, and none of them was what I was looking for. Géza has a unique, powerful silent charisma.

Was he surprised when you asked him to take the role?

Absolutely, but I told him I had my reasons and that it was all in my hands. It was my responsibility, not his.

He hasn’t acted after that, has he?

The film’s success with the Golden Bear and the Oscar nomination opened doors for you. Suddenly, you could make this project, The Story of My Wife, that you’ve been dreaming about for a long time. It’s one of your favourite books. I’ve only read the English translation, but it must be very difficult to make that book into a film. And you wrote the script all of your own. So what was that process like?

I was so thankful because my French producer only read the novel some months after we started working together, and then he said, “Now, I appreciate your work with the script even more.” So, things that some spectators could think that I just lifted from the novel, like the chapters in the film, are actually not there. I admired the worldview of the captain so much that I felt that I had the right to invent new elements in the story to be more faithful to his way of thinking. The plot was only sort of a device to make the film, but what always interested me was his very peculiar way of looking at life.

And this is what I wanted to show because it is misleadingly simple but actually unusual, the way he sees the world. When I was a teenager with no experience in relationships, I loved the book. Now, in retrospect, I see how deeply I understood many layers. That is not always the case. Because it happens very often that as a teenager, you read something, and then you read it later, and you see things completely differently. When my daughter had to read Anna Karenina in school, I told her, “it’s a wonderful, passionate love story” then I reread it and saw all the cruel bitterness. But this story stayed the same through the years.

As I said, I’ve only read the English translation, but I imagine it must be a difficult book to translate.

The English translation is rather good, but you’re right that it’s very hard to translate. The German one is awful; it is really another novel. The French one is a bit dusty; the others, I can’t judge. There are so many translations. What happened with the novel and the film is almost parallel. When the novel appeared in Hungary, critics admitted that it had nice language, but even the most fine-tuned critics just couldn’t get what the book is about. Somehow it went under the radar for a very long time.

I wrote two versions of the script; the first was like an auteur film, but since, for me, the film is about accepting that you are a part of something bigger that you can not always control, I felt that this sort of super controlling “auteur” approach would be very insincere for this film. I had two versions of the script. I discussed with my cinematographer (Marcell Rév) that I wanted a cinematic language with a more straightforward approach. Big solid blocks that would match the captain as a person and his ship.

Then the translation phase came, and I had to retranslate the script. Even though a script generally is not as sensitive material as a novel, I still felt that the essence of the story was in danger of dissipating. So actually, it is quite sensitive material.

The cafe scene is central at the film’s beginning, where Jakob wages to marry the first woman who enters the room. There were some comments about the crude language of that scene being typical for a male writer, but that part wasn’t in the book, was it? It’s your invention. Apart from that scene, the language is literal, in a way.

Yes, that was mine. It was not in the novel. When it comes to the language, it wasn’t that I wanted to be literal, but rather traditionally simple because it’s a traditional guy. The story is linear, unlike the book, where it jumps around with the inner monologue. Just before starting the film, I became interested in the problems of a traditional guy adapting to changes around him. To understand and accept another set of rules, which is the case for many men today.

Young men, for sure. In a different way, but still.

Yes, exactly. Who am I? What does it mean to be a man? I hear these complaints so often, “I’m a white male, so I don’t have a chance.”

There is a certain point to that nowadays. I experience a weird thing myself when I linked to a review with an opposite opinion of my own for balance and was told, “I don’t need a link from a white man”.

This also ties to some of the weird criticism of the film. The title is ironic in both the book and the film. It’s not a story, and it’s hardly about the wife, but some critics merely complained about the wife not getting enough space and stuff like that. Still, the reception was quite different between the Anglo-Saxon critics and the European critics, right?

Yes, the press junkets were really nice. Those European and Asian critics told me they really loved the film and not to listen to the other people.

What was it like working with Léa Seydoux and also with Gijs Naber, who came in quite late during the project?

Yes, I think he is really exceptional, and I felt for him as well that he didn’t get the appreciation that he deserved. With Léa, it became a really strong sisterhood. We plan to work together again. She is a very intelligent woman, and she and her agent are choosing projects very wisely.

At this moment, I noticed that Ilidkó only had 10 minutes before her next screening, so she had to leave before I got the chance to ask about Marvel Movies.