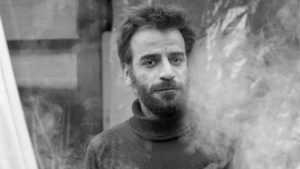 Ever since I saw Invasion (Hojoom 2017) at Berlinale 2018, I’ve been fascinated by the films of Shahram Mokri. His fourth film, Careless Crime (Jenayat-e bi deghat 2020), premiered during the Biennale in Venice and was screened at IFFR1Rotterdam Film Festival this year, where I saw it. The film deals with a famous incident in Iranian (film) history: The politically motivated arsonist attack on a cinema, screening The Deer (Gavazhna 1974), which occurred in 1978. As usual, Mokri bends time in several ways while telling the story. I had the opportunity to discuss the film with the director.

What was the genesis of the Careless Crime project? What made you want to go back to the arsonist attack during the screening of The Deer in 1978, apart from the obvious political ramifications. I saw The Deer only now during IFFR: How important is that film in Iranian cinema?

Finding the starting point for a project is not a simple task for me. It’s hard to define what the first step was. Was it a photo I saw, or a book I read? What I do know is that changing historical narratives with cinema, and with the perspective of the cinema, has always been attractive to me. In fact, the cinema can depict history, as it likes, not as it really happened.

I think the combination of these two ideas (the look at the history of cinema and the construction of a movie in the film together) may be the first step in Careless Crime. For this compound in Iran history, there was a very important cinematic event, and that was the Rex tragedy. So in the scenario, we thought that if we have a look at it today, what would change in the story?

There are many points about The Deer, which is one of the most important movies in Iran’s cinema history. Massoud Kimiyaiee is one of the first new wave directors in Iranian cinema, who always remained important to the audience, before and after the revolution, in terms of political and cinematic positions. He has been a hot debate topic for younger generations.

On the other hand, Behrouz Vosoughi is a big superstar, forever. In all polls, especially from the younger generation, he is the best actor in the history of Iranian cinema. During the years of the Iranian revolution, the tragedy of Cinema Rex has given more concepts and meters to the film. I am not exaggerating when I say that everyone in Iran has seen The Deer.

When I saw in the credits that you were also listed as “editor”, I smiled and thought ” not much to do there”, but this film is, of course, different in that regard, where you actually use editing to move between the stories and the layers of reality. (I’m using the word editing in its most technical fashion. I understand that the earlier films had editing “in the shots”) How did you reach the conclusion that this film would require a slightly different style?

Me too. on the first day, when I yelled CUT! and saw I was still in production, I laughed a lot. From the days when I made a short film until recent years, I always started and ended filming in one shot. But now I said cut, and I had to return to the remaining film, the next day. I will return to the one-shot films, for sure. It is not easy to forget the filmmaking experience in a one-shot. But in this kind of movie, it’s important for me, to make a common experience between the filmmaker and the audience.

I believe that the final product does not matter. It is important that the film production process becomes an experience geared towards the spectator’s eyes. In Careless Crime, because the film did not allow the letter, so I could not remain loyal to myself. I even thought for days that I might shoot all the movies in the cinema lounge and in one location. On the other hand, I wanted to be like a runner. A runner who walks a little in the middle of the track, but I know will get back to the race.

Do you think this is a film that is difficult to understand outside Iran? There were some names I didn’t recognize, like the general that was mentioned. On the other hand, I caught the time jump when the arsonists suddenly started talking about “this will be the end of the Shah”, even though it was apparently set in the present time.

I think that all the historical points will not be clear to the audience outside Iran. Iranians, however, know a lot about the tragedy of Cinema Rex. Several books and documentary films have been released, and every year on the anniversary of the accident, there is a lot of discussion going on among young people and on the internet.
So yes, I know that it will not be clear for a non-Iranian audience.

But I hope they can find enough information to keep watching the film. Of course, I think that’s what happens. For example, I must say that, as you know, the film does not happen exactly in the years of the seventies. The story has come to Tehran to this day. But I really do not know how much Tehran today is different from the past.

In fact, I did not like to look at history as different blocks but rather as layers. I hope the viewer of the film sometimes asks himself whether these dialogues or these costumes the characters wear are related to the present or the past. For example, look at the main characters of the story. when the cinema Rex burned, everyone was the same age. But in the movie, three of them are older (+ forty years), and just Takbali is the correct age.

I find your films quite unique. On the other hand, there is a strong tradition of meta-films from Iran. The cinema in your film has a poster of Close-Up on the wall, and I also think about a film such as Nun va Goldoon (Makhmalbaf), among many other strong examples. Even in more comical films like the works of Haghighi. Why is this? I understand that it is a way to talk indirectly about political events, but are there other reasons for this very strong meta-tendency in Iranian cinema?

I agree with you that meta-cinema in Iran is a strong tendency. That is a powerful way towards hidden ideas and things behind the main layer from our life model in Iran. In the history of Iran and to date, our lives are defined layer upon layer. For example, our lives in our homes are very different from those outside the home and in society. What is said in public is different from what is said in solitude.

So, This is not just about politics; it is also in everyday life. Maybe, for this reason, it is included in meta films. They are something like life. In Careless Crime, the posters that exist on the cinema walls cover all types of films made about cinema in Iran. On the other hand, this tradition, in which we seek something, but we mean something else, is a tool for telling the words and ideas that are not comfortable to express. All of these are reasons to find similarities and references between the films.

Talking about references, as a cinephile, I always tend to make comparisons to other films. I’m very interested in Hungarian cinema. When I saw Hojoom at Berlinale, I immediately thought about Miklós Jancsó and his style. Even a specific film came to my mind. The Tyrant’s Heart from 1981. Is this a director you have seen and is influenced by, or is it yet another example of a cinephile imagining things?

I’m also interested in comparing films to each other. Since you know my filmmaking, you have noticed that I am influenced by various films. Someone like Miklós Jancsó, and I love Béla Tarr’s style and American examples like Gus Van Sant. If you see signs of them in the film, I like it. I don’t want to hide these signs in my movie. The films I make are full of my love for other films.

The trick with sending the letter, I really loved. Especially the way it paid off in the end. It made me think of the magic suitcase in Hojoom. Would you see a connection between those two ideas as well?

I’m happy that you made that point. I was getting frustrated that the connections between those two films were lost on the audience. For example, in the sequence in Careless Crime, when the soldier wants to learn that magic about the letter, How do the girls teach him? They run a sequence like Fish and Cat (Mahi va gorbeh 2013) and Invasion, which you see again on the cinema curtain later in the film, where time is bent, and maybe their letter is a trip from cinema to reality.