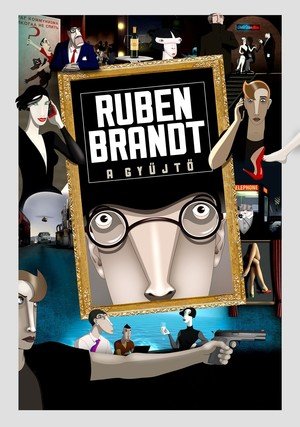 Ruben Brandt, Collector (Ruben Brandt, a gyűjtő 2018) is the first feature by Milorad Krstic, following his short My Baby Left Me, released in 1995. It’s an animated film where the titular character is a psychotherapist whose speciality is to treat artistic souls. The film begins with the sounds of Honegger’s Pacific 231, while we see a railway track with the inscription PCFC 231. A snail crawls over the track and just avoids being smashed by the train Ruben is on. Suddenly he is attacked by Velázquez’s Infanta Margarita, who is hanging outside the train. He wakes up in his office and understands that it was another of his nightmares. He notes which artworks attacked him this time.

The Passion of Ruben Brandt

Meanwhile, the cat burglar, Mimi, performs an acrobatic heist in the Louvre, where she steals Cleopatra’s fan. However, detective Kowalski is on to her, and a wild but playful chase ensues with cars, dancing and backflips from Mimi. Later she calls Ruben Brandt and says she needs help with her kleptomania. When she joins him, she meets some of his other patients. When they learn about the doctor’s nightmares, they want to help. Since he believes in “conquering through possession”, it’s decided that the group will steal the 13 world-famous paintings that attack him. While doing so, they are pursued not only by Kowalski but also by the mobster Vincenzo who initially hired Mimi for the job.

We will follow Ruben and his partners in crime through their thefts while Kowalski is on their case while looking for the possible reason for Brandt’s predicament. The story is told with an intoxicating blend of computer animation and hand-drawn images. It moves over the world like a James Bond film, but with far more style and panache. Krstic mixes styles and genres with breathtaking speed, and the images are shock-full with references to art and cinema. The characters’ appearance is steadily dazzling as well, and you will never be sure how many eyes someone has or even how many dimensions. One character is literally two-dimensional. This has facilitated his larcenies, but now he has gained weight.

The quotations and nods to other works of art never bog the film down but are all spirited, like something from an early Godard film. The theme of how art affects (or infects) individuals is obviously not new, the Stendhal syndrome just being one example. I will not divulge too much of what lies behind Ruben’s pain, but again other films could be quoted here. If you combine the wit of Trouble in Paradise (1932) with the style of Dario Argento and Alfred Hitchock (who features in a hilarious cameo), you will get a taste of the riches this film has to offer. Every image is filled to the brim with allusions, puns or merely sheer beauty.

This is a work of art that is a joy to behold. There is more in this than meets the eye, but what does meet the eye makes the film worth seeing alone. That Magritte’s La Trahison des images (The Treachery of Images) is one of the works appearing in the film is hardly surprising, but it goes so much further than that. The film deals with perception, psychology and violence equally deftly. The score by Tibor Carí must also be mentioned. Amazingly, it’s Krstic’s first feature, and it was years in the making. It is a film for everyone, not only those who claim to have an artistic soul.

Ruben Brandt, Collector, is available on Netflix in several regions, but only in English. As far as I know, the original version is not available outside Hungary. When the director won an award at the Animator Festival in Poznan, he sent this video as a thank you. It perfectly displays his sense of humour.