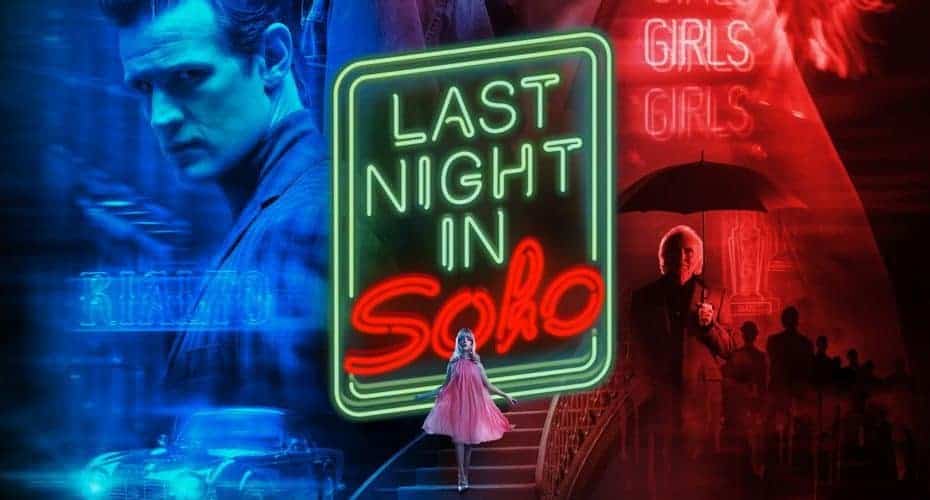 Edgar Wright is the man behind two films this year. The Sparks Brothers which is a documentary about Sparks and Last Night in Soho. The latter is about Eloise (Thomasin McKenzie), who is an aspiring fashion designer. When she is accepted to a fashion school in London, her grandmother Peggie (Rita Tushingham) warns her that it might be a dangerous place with bad men who might not have her best interest at heart. Once there, she gets into a taxi where the driver immediately makes crude comments about her legs and starts inquiring if any models are staying with her. The scene is not subtle, and one wonders if it is accurate or rather a subjective rendition of Eloise’s mind.

The thing is that her mother, who also dreamed about becoming a designer, committed suicide when Eloise was only seven, due to mental issues. It seems like the daughter might have similar problems on her own. She gets out of the taxi and hides from the driver at a newsagent that will be familiar to anyone who’s seen Peeping Tom (1960). So the men seem to be as bad as Peggy said they would be. Is there no exception? Sure there is. While Eloise is walking towards her dorm, she passes a guy who asks if she is ok. His name is John (Michael Ajao), and that is just the beginning of how caring he is. More about that later.

Nostalgia isn’t what it used to be

Eloise doesn’t get along with her roommates. Her sensitivity and nostalgic mind are ridiculed by the others. To get some peace of mind, she decides to rent a place of her own, and she finds a room in a building kept by Ms Collins. (Diana Rigg in her last part). The old-fashioned style fits Eloise perfectly. When she goes to bed that night, she seems to reach some kind of portal to Soho in the sixties. There she sees Sandie (Anya Taylor-Joy) as her reflection in a mirror. From then on, she and the spectator will follow Sandie, who is an aspiring singer during an era when Soho was a seedy place with little regard or respect for women.

Once Upon a Time in Soho

From here on, the story will swing between current reality and Eloise’s visions of the sixties. The film begins with Eloise dancing to Peter and Gordon’s A World Without Love, written by Paul McCartney. I’m generally sceptical to the tactic of slapping famous songs on films, which often feels like a cheap ploy to get the audience invested. The biggest culprit of this methodology is doubtless Quentin Tarantino. The usage of Out of Time in Once Upon a Time in Hollywood (2019) is a prime example. Last Night in Soho is continuously drenched in 60s songs, some of which are personal favourites of mine. They rarely serve any purpose, with the possible exception of Puppet on a String.

The analysis of the perils of nostalgia over an era that you didn’t even live in, doesn’t delve much deeper than in Woody Allen’s Midnight in Paris (2011). The point is driven home repeatedly, and that’s not the only instance of redundancy in the script. While trying to find out what happened to Sandie back then, Eloise is haunted by ghosts of the past. These apparitions look more weird than scary, but above all, they appear again and again. The film clocks in at 116 minutes and could have benefitted from a substantial trimming. However, that is only one of several significant problems in the film, which seemingly collapses toward the end, though the structural problems started way earlier.

Dario Argento’s Inferno (1980) comes to mind. Not merely because of Wright’s usage of blue and red, but it’s also explicitly referenced. Argento is hardly famous for his coherent plotting, but Wright and co-scenarist Krysty Wilson-Cairns’ script doesn’t make much sense either. There are numerous elements borrowed from the Italian master, stylistic as well as narrative. A fact that the Italian master seemed to appreciate. It would be interesting to conduct a detailed analysis with spoilers, pinpointing all the Argento moments in the film. It is equally interesting to see which elements are omitted like the sadistic violence and nudity.

There is one character whose sole task in the film is to be the white knight in shining armour. Since it’s 2021, the too-good-to-be-true knight is black, actually the only black character in the film except for Cilla in the flashbacks. The aforementioned John is so selfless and caring about Eloise that he comes off as an abstraction. While watching, I was toying with the thought that he might not be real but rather a figment of Eloise’s wishful imagination since he lacks proper characterisation. No such luck. Even when his involvement with Eloise puts him in a potentially scary situation, his care for her is unwavering. Ironically the casting still came under fire for not being racially sensitive enough.

Last Night in Soho is a film of its time in the sense that it is too concerned about its reception and reputation. The best films or other works of art are not made by people worried about their work’s effect. It’s akin to watching a movie made during the Hays code era, minus the inventive double entendres. At the same time, it almost reaches the preposterous pretension of the misguided Suspiria remake. Like many contemporary films, it’s too turgid and self-absorbed to work. Unlike the works of the Seventies that seemed to arise from an authentic impulse, this comes off as a muddled compromise, intended not to offend anyone.

Tech credits can’t be faulted, as the business magazines would say. The production design and the cinematography by Chung-Hoon Chung are top-notch, even if the purpose of it all can be questioned. When I find myself irritated that the flashbacks are set in 1965 and Puppet on a String, performed at the club, is from 1967, I understand that the film has lost its hold on me, to paraphrase the Beatles song. My doubts about Edgar Wright as a director were not cleared away by Last Night in Soho. His sensibility seems to be better suited for films like The Sparks Brothers.