The Cinematic World of Sparks 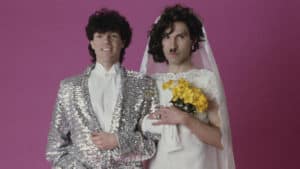 During the 50 years that Sparks has been active, the cult band from Los Angeles has constantly defied conventions and expectations. This year they are in focus because they are involved with two films. The first one is the documentary about the band, The Sparks Brothers, by Edgar Wright. The second is the musical film, Annette, for which they wrote the story and music. It is directed by Leos Carax and will open at the Cannes Film Festival. The title of Wright’s film derives from the fact that the group is formed by brothers Ron and Russell Mael, where the former is the songwriter and keyboardist, and Russell is the singer known for his wide range.

Life isn’t much, but there’s nothing else to do 1From La Dolce Vita

If the band is primarily known for their quirky musical style and Ron’s witty and occasionally acerbic lyrics, there has always been a connection between Sparks and other art forms. This is not surprising considering that Ron Mael went to UCLA to study cinema. and graphic arts, whereas Russell studied filmmaking and theatre arts in the same place. The visual presentation has always been imperative in their work, on stage, as well as their distinctive videos. They are both lifetime film buffs, but they have also been involved in films in different ways.

When You’re a French Director, la vie is not always belle

One such instance was the film Confusion that they were supposed to make with Jaques Tati. It was in 1974 that Tati wanted to make the film, starring the brothers as two American TV studio employees brought to a rural French TV company to help them out with some American technical expertise and input into how TV really is done. That’s the way Ron described the project. However, Tati’s financial status, in combination with his declining health, complicated things. Tati died in 1982. Five years before that, Sparks appeared in the film Rollercoaster, but it turned out to be something that the brothers came to regret.

Tsui Hark was another director that Ron and Russell admired. In the early nineties, they wanted to make a film of a manga series called Mai, The Psychic Girl, which Hark was supposed to direct. Once again, the project didn’t come to fruition, but on their 1994 album Gratuitous Sax and Senseless Violins, a song was called Tsui Hark and featured the director talking about his work. Their collaboration would get yet another chapter four years later when Sparks ended up writing the score for Knock Off, directed by Hark and starring Jean-Claude Van Damme. In the end, not that much of Sparks’ music was used in the film since a third person was brought in to compose the score.

The Seduction of Ingmar Bergman

After some highly successful concerts in Stockholm in 2004, a producer of Swedish National Radio approached the Mael brothers and asked them to do something for the radio. They were given free rein with the only stipulation that it should involve Sweden in some way. Thus the musical, The Seduction of Ingmar Bergman was born. It was initially broadcast in 2009, and the story is a fantasy about the director. After having watched an American film, “against his will”, Bergman finds himself transported to Hollywood. A limo driver (sung by Ron) awaits him to bring him to the studio. The story gets darker and weirder and turns into a Bergmanesque nightmare.

The role of Bergman is played by Jonas Malmsjö, who is not only the son of Jan Malmsjö, who played the bishop Vergerus in Fanny and Alexander (1982) but also worked with the director himself, notably in Ibsen’s Ghosts together with his father. The story directs several jabs at Hollywood, where the brother’s experiences were not always the best. Their love and knowledge of cinema are best expressed in the song The Studio Commissary, where a studio chief is trying to convince Bergman that Hollywood is not so scary after all. The song contains references to multiple directors who crossed the Atlantic to work there.

The musical was performed as a stage production in Los Angeles, directed by Guy Maddin. It was dubbed a “film-to-be” It featured director Maddin on stage, visibly giving directions, and projections by his usual collaborator, Galen Johnson. Once again, the film didn’t materialise, even though it seems that Sparks has not completely given up on the project yet.

Annette is not the first project that connects Sparks and Leos Carax. In the latter’s 2012 film Holy Motors he uses their song How Are You Getting Home in one memorable scene. On the 2017 album Hippopotamus, there is a song called When you’re a French director, where Carax plays the accordion and also sings the director’s part, With lyrics like “When you’re a French director, you’re an auteur as well. What does that mean? Every scene must be obscure as hell”, it’s obviously tongue in cheek. And now it’s time for their joint project, Annette, to see the light of day.

For all the great music that Sparks has created, a special mention must be made about Ron Mael’s lyrics. If he is interested in the visual look of things, he’s equally adept at creating lyrics that are not merely sharp, witty and ironic, but also conjure up images or metaphors, which was even a title of a song including lines like “A Metaphor is a breath of fresh air”. On their latest album, A Steady, Drip, Drip, Drip a character admits in the song Self-Effacing that “Autotune has been used. Used and perhaps a trifle abused”. Sparks is currently working on their 26:th album. Expect the unexpected.