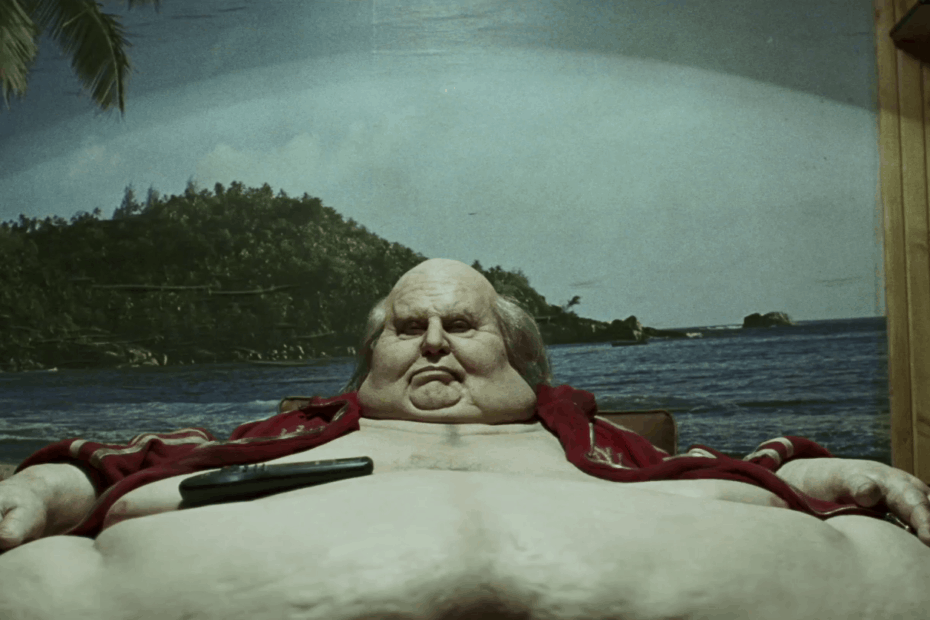 György Pálfi made his debut with Hukkle in 2002. An original film based on the unusual murder case in Hungary called “The Angel Makers of Nagyrév. It made a splash and was acclaimed in smaller festivals around Europe. Four years later, Taxidermia was released. It was screened in the Un Certain Regard section in Cannes, and the reactions were strong and mixed. Some were impressed by the technical proficiency of the film, whereas others were merely disgusted by the content. The film is a family tale of sorts, chronicling three generations of men in the same family. The first story, set in wartime, follows the sex-obsessed soldier Morosgoványi, portrayed by the recently deceased actor Csaba Czene,

In one of the first scenes we see him masturbating while playing with fire. That is not even the most painful thing that will happen to said member. We then see him being hounded by his captain Hadnagy who repeatedly interrogates him. However, his wife is among the objects of Morosgoványi’s affection. Due to bizarre circumstances, he has a son that we will follow in the second part of the film. Set in the sixties, Kálmán is a speed eater and we see him and his fellow competitors eat copious amounts of food, only to throw up all of it moments later. Kálmán falls in love with Gizi who practise the same sport. Their son, Lajoska is the titular taxidermist

Monty Python’s The Meaning of Life premiered in Cannes in 1983, where it went on to win the Grand Jury Prize. There was a competition during their opening party where the prize was a role in the next Monty Python film. The winner was Swedish actor Brasse Brännström, who refused to redeem his prize, explaining “I’m not so good at puking”. That story came to my mind the first time I saw Taxidermia. The vomiting in the second part of the film makes Mr Creosote in the Python film seem mild in comparison. It may still be one of many influences of Pálfi’s work. Another one might be Terry Gilliam.

The brief description of the plot above is due to the fact that this is a visceral, immersive experience that relies on impressions rather than a plot. There is a framing device, set in a modern gallery with an audience dressed entirely in white, where a man tells the family’s story. The character in question is first seen in the third act. (An expression I exclusively save for triptychs.) Critics pondered over whether there was any point to the perfectly executed cinematic exercise, or if it was a case of style over substance. The second question is moot since style is substance. A recurrent visual theme is circularity, notably in a scene where a bathtub is used to display time.

The script, written by Zsófia Ruttkay with the director, is based on two novels by Lajos Parti Nagy, who also has a cameo as a corpse in the above-mentioned bathtub sequence. More than one viewer opined that the script was only meant to shock the spectator. With the amount of grotesquery on display, including but not limited to bodily fluids, the reaction is not surprising. For an open-minded viewer, there are lots of pleasures to be derived from the film. The cinematography by Gergély Poharnok is often stunning, whether or not it’s aided by CGI. Amon Tobin’s music is likewise highly effective and fits the film like a stuffed animal glove.

It’s a film that perfectly fits Francois Truffaut’s definition that a director doesn’t have anything to say; he has something to show. One could write about the obvious irony that gluttony is used as a metaphor for communism rather than capitalism, and ponder over other topics as well. The truth is that it still wouldn’t say much of what the film is demonstrating. Whether it is some hungry cats or something completely different.