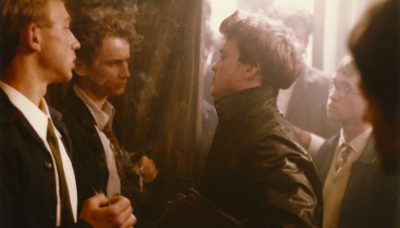 Péter Gothar is a director whose debut feature, A Priceless Day (Ajandek ez A Nap 1979), was a critical success. The story about a couple trying to get an apartment in Budapest in the late seventies struck a nerve with the audience as well. With cinematography by Lájos Koltai, the film won the first film award at the Venice Film Festival in 1980. still, the cinematic leap that would come two years later was quite unexpected. Time Stands Still (Megáll as Idö 1982) is routinely listed as one of the best Hungarian films ever made. One such example is the New Budapest 12 list from 2000 that had Jancsó’s The Round-Up as number one and Gothar’s work as number six.

Time Stands Still deals with the aftermath of the 1956 uprising. After a brief prologue set then, the rest of the film takes place in the sixties. We follow Dini and his older brother Gábor whose father left Hungary and left their mother as their sole caretaker. Then the film jumps to 1963, where we follow the boys and their classmates growing up under the influence of American pop culture while dealing with the political repercussions of the previous events. Merely entering the university they want, requires political manoeuvring. Sometimes the teenagers are very aware of what they are doing. At other times their behaviour causes unintended political reactions like when the headmaster gives a speech commemorating the war.

The script was co-written by Gothar with Géza Bereményi. A writer that later would start directing as well, most notably in the excellent Eldorádó in 1988. He had already worked with Gothar in a film made for TV called Imre in 1979. The script for Time Stands Still is wonderfully balanced between the political and personal and the way they are intertwined. Not only is the story constantly compelling, but the film is also littered with great dialogue. One of the best scenes occurs when Dini’s mother pays a visit to one of his teachers, but there are plentiful brilliant scenes like that in the film. The direction of the young thespians is also perfect, and all of the performances ring true.

Another major factor to the film’s success is the magnificent cinematography by Lájos Koltai. The film revels in the colour scheme with the mint green walls and other objects that conjure the era perfectly. Slow-motion, wide-angle shots and other means are expertly handled as well. The film is a marvel to behold, not least since it was restored. Unfortunately, the DVD release was not anamorphic for some reason. The use of music is also perfectly balanced. Sure, there are lots of songs from the era on the soundtrack, but they generally serve a purpose and are not there merely to save a scene that wouldn’t be as compelling without it. A method that is employed far too often nowadays.

Other films by Péter Gothar

Gothar would make other good films such as Idö van (1986) and most notably The Outpost (A Részleg) in 1995. The latter is a film that I find impressive. Most of his films are actually worth seeing. Nevertheless, Time Stands Still remains the film that he will be famous for. It was also awarded abroad. A youth prize at the Cannes Film Festival and Best Foreign Language Film by the New York critics. It is certainly a film that has withstood the test of time, and it is both profound and entertaining. After watching it, you will never listen to Paul Anka’s You are My Destiny, in the same way again.