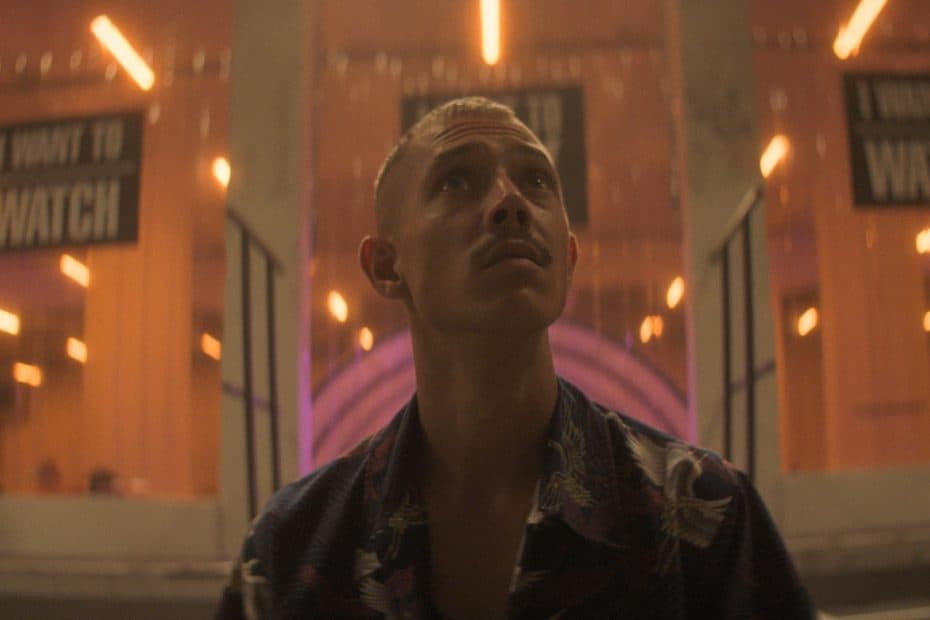 Three Thousand Numbered Pieces (Háromezer számozott darab) is the second fiction feature by Ádám Császi, following Land of Storms (Viharsarok) in 2014. It was co-written with Balázs Lengyel (Lajko: Gypsy in Space Lajkó-Cigány az űrben 2018), reviewed here. The World Premiere occurred during the Black Nights Film Festival in Tallinn this year. The film is primarily set in one of the most prestigious theatres in Berlin and depicts the tribulations around a performance with a group of Roma actors directed by a non-Roma director. The origin of the film is a play which was first performed in Budapest but later moved to Berlin. Ádám Császi was the director, but in the film, the part is played by Kristóf Horváth.

In the very first scene, we see a guy stretching his legs and eventually striking a ballet pose. Then he seems to notice the camera and starts talking. “I’m Rómeó, the first Gypsy pro dancer.” He walks out of frame to suddenly reappear and says, “If I told you why I’m lying to you, would you believe me? You wouldn’t like the truth, and you want truths that you like.” The camera pans away to introduce another character, Edmond. He claims that he was born a Gypsy but is not a Gypsy. How so? “I wasn’t a drug addict, never sold prostitutes, never stole a car. I take regular baths, wear clean clothes, and never had sex with my sisters.”

The other three Roma protagonists, Mario, Christopher and Szintia, are introduced in a similar fashion. Thus the rules (or lack thereof) for the film are set. This will be a film that is not afraid to dwell on the artifice while still aiming to challenge preconceptions, not only about the Roma population but about art and the art world, as well. Let’s deal with one of many elephants in this theatrical space, the language and which terms are accepted. During a press conference in Berlin, the director tells the press not to use the words Roma or Gypsy since they are derogatory words. The journalists immediately use these words, as does the director when he answers their questions.

When I interviewed the director, I learned about how the project started. The play is called Gypsy Hungarian and had a hugely successful run in Budapest for 18 months. The film is not in any conceivable way merely a recreation of what took place. Like the initial scenes imply, this is a meta-film where phrases like truth and lie are constantly put into question. With my disapproving mind, I was quite wary of where the film would go. The subject matter routinely leads to a highly idealised view of the characters, and combining it with a meta approach sounds like a recipe for disaster. My scepticism quickly yielded to awe and delight.

The concept is brilliantly handled and manages to show genuine respect for the Roma characters without shying away from the more problematic aspects. It doesn’t fall into the trap of presenting them as angels without faults. The protagonists wrote their own stories that became the play. At the same time, the film also deals with the possible exploitation of the characters by the director. In a film full of humour, one of the most hilarious aspects of the film is the satire of the Western art world. There are several laugh-out-loud moments in the film, not least in the description of the theatre and the world around it.

One of the parts is portrayed by Wieland Speck, the former director of the Panorama section at the Berlinale. Incidentally, the section where Land of Storms was screened with immense success in 2014. If the incisive insights and uproarious satire aren’t enough, the film also looks gorgeous. István Balázs Balázs’s circumfluent camera adds to the vertiginous feeling of the film. There is so much food for thought Gefundenes Fressen in this film that would warrant a deeper analysis, but that would spoil the experience. The best way to experience this intelligent, perceptive, but above all, stupendously funny work is to go in with as little prior knowledge as possible.

As the opening scene of the film suggests, Three Thousand Numbered Pieces constantly plays with the notion of truth and fact through a fractured narrative. The title derives from the fact that a real Roma house was transported to the Berlin theatre in pieces but also points to the jigsaw fashion in which the film unfolds. The house on stage literally opens the fourth wall, which acts like a curtain. This is easily one of the best films of the year. Hopefully, it will get the attention it deserves. The film is everything that this year’s Palme d’Or winner is not, and it never feels either square or superficial.

The film was screened in the Rebels With a Cause section at PÖFF.