Whose Dog Am I? Robert Lakatos 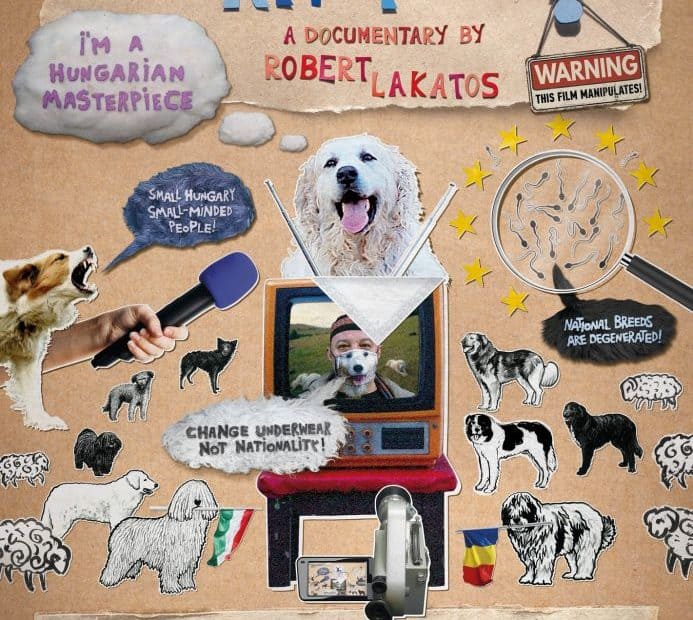 Whose Dog Am I? is a documentary by Robert Lakatos about dog breeding in and around Hungary. In some ways, we get a glimpse into a world unknown to many of us, but above all, this is a film about nationalism, racism and identity. We follow the director’s attempt to find a mate for his kuvasz dog. The goal is to keep the breed alive since it’s “one of the best dogs in the world.” Lakatos belongs to the sizeable Hungarian minority in Romania and thus has a Romanian nationality but a Hungarian identity. All those factors come into play in the film. In many ways, the film plays as a mockumentary with its irreverent treatment of the themes presented.

The documentary genre is a treacherous one whose methodology is too often misunderstood. Lakatos is transparent from the get-go. In the first sequence, we see the director on a TV set in a garden. When he is not playing the flute and lamenting in a song how politics got in the way of getting a puppy for his dog, he explains, “This film does what every film does; it manipulates.” That sets the film’s tone, where some of the manipulations are obvious. Among them are the speech bubbles depicting the dogs spewing nationalist slurs at each other.

Whose Dog Am I? Who is the critic?

The topic of the Hungarian minority in Romania and how it’s been treated (not least during the Ceaușescu era) remains a sore topic in Hungary and has been so since WWI. The insolent way that the director approaches the issue might not appeal to everyone, even though anyone who thinks there are more important things than origin and nationality should find lots of things to like in the film. The film had its international premiere during the Warsaw Film Festival in the Free Spirit Competition. The director was present, and the biggest source of applause was the fact that he speaks Polish. The sold-out venue was not entirely surprising, considering that Poland is a country that rates dogs very highly.

The style and approach of the film made me think about the French director Luc Moullet. Documentary directors can be Moore or less transparent. Whose Dog Am I reminded me of Moullet’s La terre folie, which I had the pleasure to watch in the director’s presence in Paris in 2009.1 Another memorable moment with Moullet was when he chose Raoul Ruiz’s La chouette aveugle (1987) as his favourite film and talked about it in the presence of Ruiz. At 80 minutes, it doesn’t outstay its welcome, and If it is true what Miklós Jancsó said that the reality today is so absurd that the only thing you can do is laugh, Lakatos’s film might be the perfect remedy.