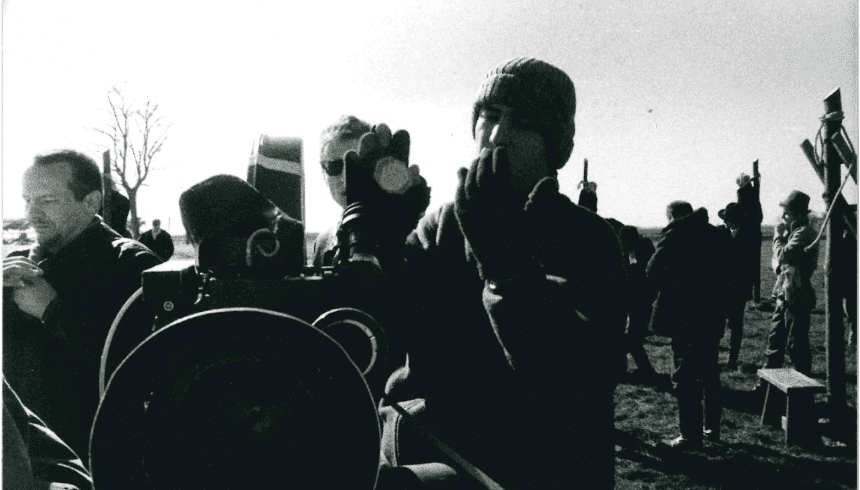 Szél (Wind1996) is a short film directed by Marcell Iványi. The origin of the film goes back to 1994 when Yvette Bíró was teaching a film class and gave the students the task to write a script based on the photograph Trois femmes by Lucien Hervé. The choice of photographer was not a coincidence. Hervé was born in Hungary under the name László Elkán and moved to France in 1929 at the age of 19. Iványi’s script was considered the best, and the producer György Durst agreed to make the film with the aid of Hungarian Television.1He would later produce the first short of Bálint Kenyeres, Zárás. Production of the film began in 1995 and finished in 1996.

Hervé’s photo was taken in Audincourt in eastern France in 1951 and depicts three women in different clothes standing behind each other near a country house and looking tensely in one direction, leaving it to the viewer’s imagination of the photo what they are paying attention to. Their clothes are slightly stretched by the wind. The decision was made to shoot the film in one continuous shot circling 360°. The sequence was shot four times at different times of the day, and eventually, the third take was chosen. Made two years after the slightly longer Sátántangó, Béla Tarr is an evident role model, as is Miklós Jancsó. Another significant influence was the great but sadly semi-forgotten director György Fehér.

The release in February 1996 was an instant success. The following month, the film was screened in Paris in the presence of Hervé, who approved what he saw. The film was submitted to Cannes, where it didn’t have to shake the Barley to win the Palme d’Or for best short. One of five Hungarian films that have that honour, among them Fight (Kuzdök1977) by Marcell Jankovics. There is no dialogue in the film, but the soundtrack is quite expressive, particularly the titular wind. Combined with the stark cinematography by Zsolt Haraszti, the effect of the film is mesmerizing.

It has been pointed out that a traveling shot in Godard’s Week End (1967) (NO, not that one!) seems to be inspired by the same photograph with a circular movement including the three women. Nonetheless, the content and conclusion of that shot are different from the one in Szél. Iványi would make another solid short in 2006 called Ballada. Inspired by an Italian painting from 1901, the film competed in Venice that year without grabbing any awards. It’s no exaggeration to say that his 1996 effort remains the director’s claim to fame.

The film is not that easy to find online, but it’s available here through facebook. It can also be seen on YouTube in a weird version, with music being superfluously added. The original version is highly recommended.