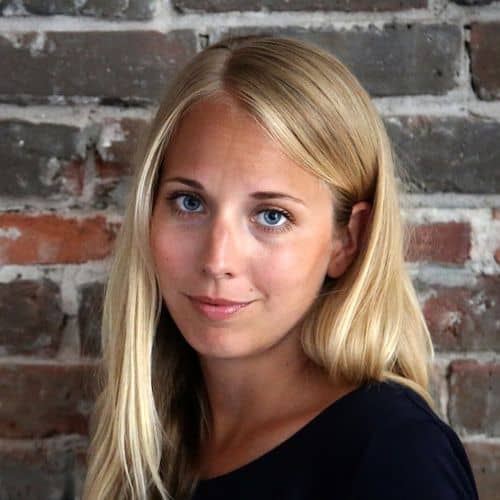 I watched Six Weeks (Hat hét) by Noémi Szakonyi at the Warsaw Film Festival. As I stated in my review, there were plenty of things to like in the film. I was able to interview the director after the screening.

Can you tell me a bit about how the project started? I know it was initially a documentary project.

Yes, correct. Yes. I graduated as a documentary filmmaker, and my husband (Maté Vincze) and I were classmates back then. It was originally his topic since he was really interested in the topic of adoptions. He started to research this topic, and he came across this thing with the six weeks.

It’s a relatively new law, like eight years old or something?

Yes, it is from 2014 In Hungary. It always existed in closed adoptions but not in open ones. Open adoption means that the parties know each other. It exists everywhere in Europe, in Germany, for example, it’s eight weeks. We were talking about it, that we should maybe make a documentary. We started to do research and get to know the parties involved, but the more we got involved, the more we realized that this situation is so vulnerable. And if we go very close with our cameras, we might have an influence on the outcome and the decision, and we didn’t want to do that.

Not everyone cares about those things.

I think documentaries require a certain cruelty which is fine, but I don’t have the skill. You know, sometimes I feel like I want to make fiction because I lack that skill. With fiction, I don’t feel the urge to switch off the camera or respect privacy. I can go close enough. So that’s why we decided to write a script and make a fiction film.

You were three people who wrote the script?

Yes, yes. Because my husband, who I did the research with, involved the scriptwriter, who we’ve worked with many times (Daniel Daoud), and he was our co-writer.

How did you approach the casting process?

So we worked with the casting for a very long time. We didn’t find our Zsafi. We tried many actresses, many non-actors, ping pong players, and many, many young girls. And then one of our friends and former classmates told us that he knows this girl who he thought would be perfect. We invited her to the casting, and we did some improvisations. She was really wonderful. We watched the material at home, and she was so subtle, you know, and so like, visceral that we felt okay, she might be the one.

And this is her first role?

Yes, she doesn’t really have any acting experience. She wanted to apply to the Hungarian University of theatre, but she wasn’t accepted.

So she had acting ambitions?

Yes, she had ambitions, but she didn’t get the chance yet, but I hope this will give her exposure and that she will get more work.

The film is quite calm and composed, even though the topic almost invites an overly dramatic approach with the six weeks and everything. Instead, it’s almost objective, and we understand both sides.

Yeah, because I feel like I have a documentary gaze on it. And although I studied in the US, in New York, they focus on American independent films, which I really love. I also think that our approach is similar to the Romanian New Wave. We just wanted to show the truth of it how these parties feel. And I didn’t want to make it overdramatic or manipulative.

You mentioned Romanian cinema because I was thinking about that that when I saw your film, but also with a film I saw a few years ago, One Day (Egy nap 2018). It made me feel that the film was more Romanian than Hungarian.

Ah, Zsófia Szilágyi, that was a brilliant film. I really liked it. I would say that one of my biggest inspirations for this film was Fish Tank (2009). I really loved that one, and I felt like the characters have a similar drive. My film is based on the story of a girl who was a basketball player and got pregnant. We changed it to a table tennis player since that is a working-class sport, but also because it can be played individually as well as in a team, which suited the topic.

Did she ever play table tennis before?

No, never. Katalin trained to play ping-pong for six-seven hours every day for weeks, so eventually, she could look like she knew how to play, with some help from the choreography. The cinematographer (Zoltán Dévényi) warned me that it’s one of the hardest sports to capture on film and make it look good, but we tried as well as we could during that limited time frame.

The way she is framed during the training sessions is interesting. She is very often alone, even when she is playing double, which emphasizes her situation and loneliness.

Yes, but in some ways, she creates that for herself. She is responsible for that.

Sure, so what was the overall concept of the cinematography? There are lots of hand-held shots when we follow Zsófi around, but the camera is more steady during the bureaucratic scenes.

The overall approach was that we have to be choppy when we are with her, and then the bureaucratic scenes are more set up, emphasizing the absurdity of the scenes. Then table tennis should be a place where she gets to be free, with the Steadicam, and also with vibrant colours. When it comes to her home (shot in a studio), we worked with a pastel palette.

Table tennis is what is supposed to create Zsófi’s career and make money, but in some ways, it is a trap, as well.

Yes, of course, that’s why we have the windows with bars. It looks like a prison, but a prison where there is air and space. When it comes to her home, I really like that idea that our home is pinkish; it’s more like, for me, it was like a home. And I didn’t want it to give this like, sad, gloomy Eastern European grey thing because, for me, that’s not the reality but more of a cliché.

What have the reactions been like so far? Anything that you didn’t expect?

So they were basically looking for another film?

Another interesting aspect of the film is that the young father is almost absent in the film, but refreshingly enough, he doesn’t seem evil like all men are in many of the recent abortion-themed films. What was the idea behind Krisztián?

We wanted to show him a bit like a young guy who tries to be cool and tough, but you feel that he is just a kid and doesn’t know how to face the situation he is in. We could have developed him more, but first of all, we didn’t have time, and I also think it works the way it is. I’m happy with how the film ended up.