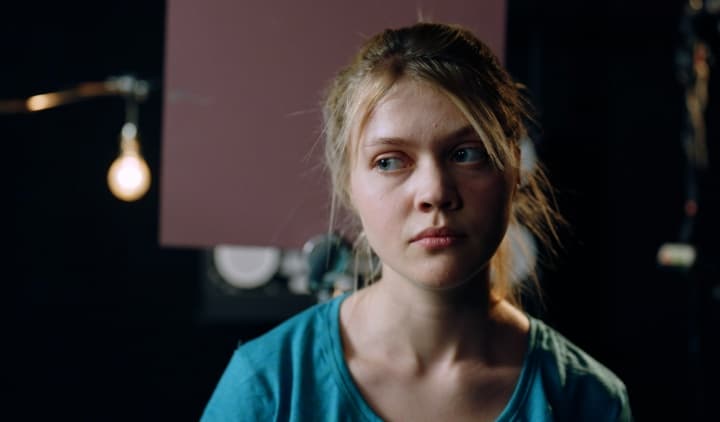 Six Weeks (Hat hét) is the debut feature by Noémi Szakonyi. It tells the story of Zsófi (Katalin Román), who is pregnant and has decided to give up her child through open adoption. According to a relatively new law (2014), the mother has six weeks to change her mind after birth. The film is not limited to the titular weeks, but we will follow Zsófi before and after the birth. She comes from relatively poor circumstances and lives with her mother, Béa, and younger sister in a small flat. It is soon apparent that Zsófi is the one who carries the household, while her mother rather spends money on alcohol than on food.

Zsófi is a table tennis player whose big goal is to qualify for the European Cup. Having a baby would thwart that aim. However, it’s not the only reason for the adoption decision. The child was never planned, and the father, Krisztián, is not a very important person in her life. He appears briefly in the film and is often regarded as a nuisance rather than anything else. Six Weeks largely shows us the meticulous table tennis practice and several bureaucratic meetings where the legal and practical aspects are explained. Her coach and one friend are the only ones who know about the pregnancy, which is camouflaged as hernia surgery.

The Drama of Six Weeks

The situation and the time frame could be fodder for melodrama, from the mother’s hormones kicking in post-birth to the anxiety of the new parents having to expect a call at any time during the six weeks that the mother has changed her mind. There is also the family situation where Béa constantly talks about the child and wants Zsófi to reconsider, possibly as a reaction to her own motherly failures. It’s to the credit of the director and co-writer Maté Vincze that the film stays clear of those traps. This is a sober account of a difficult situation for everyone involved. There are no simple scapegoats here, and the film is also refreshingly devoid of misandry.

The film has been called stressful and gruelling. I would rather say that it is a perfectly balanced work about a stressful and gruelling situation. Zoltán Dévényi´s lensing is a major asset for the film. Combining hand-held camera for exteriors and the table tennis scenes with a more static approach during the bureaucratic sequences create a dynamic that heightens the film’s power. Her sports career is a way out of her current situation, but it takes its toll and could be a trap as well. The practice area has visible windows, implying the road to freedom, but they all have grids. The way the baby is depicted after the birth is another rewarding aspect of the film.

The acting is uniformly excellent. Without using the cliché of carrying the film on her young shoulders, Katalin Román is perfect in her first part, with Zsófi´s tenacity and vulnerability being subtly portrayed. The other thespians offer fine works as well, including Mónika Balsai from Liza, the Fox-fairy. Due to the programming at the Warsaw Film Festival, another mature film about adoption was screened two days later, seen from a different angle. The topic is obviously not new, and among famous Hungarian films on the issue, one could mention Adoption (Örökbefogadás1975) by Martá Mészaros. The subject is strong in itself, and unnecessary questions about why other topics are not addressed in the film should swiftly be aborted.

When I interviewed the director, she expressed her admiration for films like One Day (Egy nap 2018), and recent Romanian cinema, without pointing to them as actual inspiration. It is still easy to see the resemblance in tone, but Six Weeks is a vital work that stands firmly on its own, and Noémi Szakonyi is a talent to follow in the future.

Screened at the Discoveries section at Warsaw Film Festival.