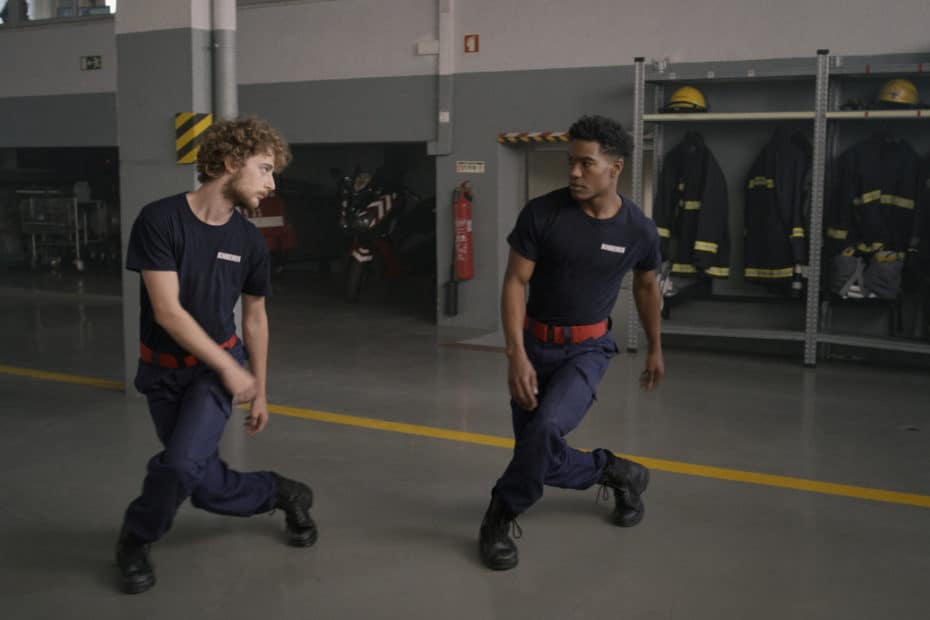 Will-o’-the-Wisp (Fogo-Fátuo) is the latest film by João Pedro Rodrigues, the director behind films such as O Fantasma (2000), Odete (2005), and The Ornithologist (O Ornitólogo 2016). The premiere took place in the Quinzaine de réalisateurs section at the Cannes film festival this year. The synopsis reads, “On his deathbed, his royal highness Alfredo (Joel Branco), King without a crown, is taken back to distant youth memories and the time he dreamt of becoming a fireman. The encounter with instructor Afonso from the fire brigade opens a new chapter in the two young men’s life devoted to love, desire, and the will to change the status quo.” The film itself doesn’t revolve around the narrative to a large extent.

The film starts in 2069 for obvious reasons. Alfredo’s mind flashes back to 2011 when he (now played by Mauro Costa) suddenly gets interested in environmental issues, particularly the protection of the royal trees. In 2017 when wildfires destroy the ancient trees, he decides to act. In a hilarious scene, he quotes Greta Thunberg’s infamous “How dare you”- speech in front of his family and decides to give up his crown to become a fireman. The family is sceptical, but Alfredo insists. Only then, 18 minutes into the film, do the titles appear with the description, “a musical comedy. He is met by scepticism from the commander, who nevertheless chooses one of the firemen, Afonso, to teach Alfredo the basics.

The film has a whimsical feel throughout, but in the fire station sequences, it turns into a musical of sorts. The firemen seem to have a lot of time on their hands which they use to re-enact famous artworks together in the nude. It’s conspicuously evident that there will be more igniting fires than putting them out. The premiere audience in Cannes was quite lively and laughed and applauded every steadycum-shot but seemed less amused by the irony towards Thunberg. Even with all the sexcapades, Alfredo is never entirely accepted and is often mocked, even by Afonso. There are numerous choreographed dance numbers at the fire station, and the film packs a lot into its 67 minutes running time.

Other directors at the festival would have done well to take the chapter of brevity that the Portuguese director adheres to. In a festival with far too many overlong works, Will-o’-the-Wisp felt pleasingly refreshing. As in most of the director’s films, the cinematography is by Rui Poças, who has an impressive tracklist, including (Zama 2017) and Tabu (2012). He lensed the debut film by Cristèle Alves Meira, and Alma Viva as well, which was screened in Semaine de la critique this year. The images are slightly more solemn than in the earlier films and would not be out of place in a Manoel de Oliveira film. Rodrigues knows what he wants, which is manifested in the film’s splendid look.

While the environmental concerns are clearly present, the film never resorts to preachiness. Even if the setting is the ashes after the forest fires, if one were forced to extract a message from the film, it would centre on passion and desire instead of trite political concepts. As Rodriguez explained in my interview with him, the film was made on a meagre budget and was shot in sixteen days. Still, Will-o’-the-Wisp is far more entertaining and insightful than most of the films in the competition. One could ponder on questions about race and sexual politics, but that would point toward a more heavy-handed experience, like Triangle of Sadness, where the Portuguese director’s film is rather a trapezoid of joy.