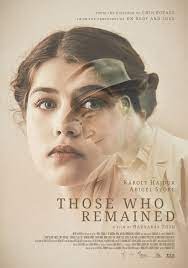 Barnabás Tóth is a French-born Hungarian director. His first feature, Rózsaszín sajt (Camembert Rose 2009), didn’t get that much attention even though it was quite funny and charming. In 2013 he released the short My Guide (Újratervezés) with veterans Zsolt Kovács and Judit Pogány playing a couple in a car. This amusing work was seen more than 1,8 million times on Vimeo.

In later years Tóth has been shortlisted for an Oscar twice. The first occasion was for his 2018 short Chuchotage (Susotázs) about two simultaneous Interpreters fighting over the attention of the sole Hungarian participant at a business presentation, Will things get lost in translation? The film is quite droll, not least with the bickering dialogue between the interpreters. This short is available on Vimeo as well.

Those Who Remained tells the story of Aldo and Klára. Having survived the camps. 42-year old Aldo lives a solitary life as a doctor in Budapest. 16-year old Klara lives reluctantly with her great-aunt, refusing to accept the fact that her parents are dead. She meets Aldo, and soon the two of them find something in each other that has long been missing in their lives. The film is based on a novel by Zsuzsa F. Varkonyi, incidentally born in 1948 when the story begins. The two characters meet when Klára comes for a medical examination, looking for an explanation for her delayed puberty. She is angry and resentful of everyone and everything.

It is not difficult to understand why Those Who Remained was shortlisted for an Oscar. In many ways, it’s an uplifting story with quite a different angle. Even though it’s set in a very dark era in Hungary’s history, between two dictatorships, the tone is lyrical and occasionally even sweet. The drama is understated, even when people start gossiping about the two living together or when a co-worker reveals that the Communist party has told him to spy on Aldo. The focus is constantly on the character’s possible healing process rather than aiming for cheap drama.

Károly Hajduk and Abigél Szőke already played opposite each other in a highly different context in Arpád Sopits’ Strangled (A martfüi rém 2016). They are both perfect in their roles here. It’s a film that is classical in style. The cinematography by Gábor Marosi is constantly handsome and evocative and serves the story more than anything else. Anyone looking for groundbreaking cinema should look elsewhere. If one, on the other hand, wishes to experience a mature sobering work that is genuinely moving, Those Who Remained has plenty to offer. It packs lots of riches during its brief running time, and manages to boost the spirit of even the most jaded spectator.