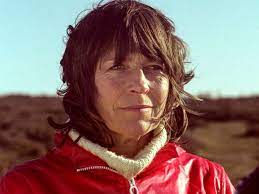 Enys Men is the eagerly awaited new film by Mark Jenkin after the sensational feature debut Bait in 2019. The world premiere took place in Quinzaine des réalisateurs in Cannes this year. The synopsis reads, “Shot on 16mm; this Cornish folk horror film unfolds on an uninhabited island in the Celtic Sea where a wildlife volunteer’s daily observations of a rare flower take a dark turn into the strange and metaphysical.” The nameless volunteer we follow is portrayed by Mary Woodvine, who also had a part in Bait. The volunteer’s existence on the island seems monotonous. Every day she tracks the changes, or lack thereof, in her notepad. The way we see her handwriting makes it virtually ritualistic.

She also has a peculiar habit of dropping a stone down an abandoned mine to experience a barely audible splash. The cottage she lives in seems to be covered in moss and gets its power from a petrol generator. The petrol is the source of her sole human contact through the delivery man, portrayed by Bait lead Edward Rowe. The monotony is eventually disrupted by several changes, such as lichen growing on the flowers. After writing “no change” for some time, the volunteer now gets to write about something actually happening on the island in her meticulous handwriting.1It is not Mary Woodvine who does the writing, but a hand-in. These are not the only changes on the island.

The atmosphere and mood of the medium, the careful intersection of sound and image, light and time, is where film comes to life.

A young woman seems to appear. Sometimes the volunteer talks with her, but not without distortions that make the spectator question if she is a family member or someone else from the carousel of time and imagination. Other visions include an old priest singing a hymn where the lyrics might allude to the rock statues outside, which are said to commemorate people lost at sea. The more the viewer tries to make sense of things, the more opaque the film seems to appear. Enys Men is a film of few words but with a soundtrack that speaks volumes. Set in 1973, the film might inspire references to other films made that year, like Don’t Look Now or The Wicker Man.

No Country for Enys Men

When asked for references after the screening, Jenkin mentioned Bresson and Nicolas Roeg. Since the film is in colour of a kind that feels like a film from the seventies, there will surely be no lack of comments comparing Enys Men to the aforementioned Roeg film. However, the way the director treats time here is closer to Bad Timing (1980). Jenkin commented on the use of time, saying that he doesn’t necessarily regard it as a division of past, present and future, but rather a present mind at work. This line of thought is very similar to that of Alain Resnais, who claimed that he never used flashbacks in his films.

It doesn’t require much effort for this writer to think of Resnais, who would have had his centenary this year. I feel that the comparison is eminently suitable when it comes to Jenkin’s film. The shots of the island with the rapid montage of rocks and fauna are reminiscent of Resnais’ style in Mon Oncle d’Amerique (1980). More critical than the visual similarities is the fact that both directors are primarily formalists. Resnais often started with the formal elements before he knew what the film would be about. L’Amour à mort (1984) is a prime example but far from the only one. Even though he was arguably the master of formal invention, he was far from alone.

In 2022, the situation is different. Formal elements appear to be an afterthought and too often merely serve the narrative. It is not unusual to go through an entire festival without watching anything formally exciting. This year’s Cannes festival presented three such films within two days; Skolimowski’s EO, Myllylathi’s The Woodcutter Story, and Enys Men. When I interviewed Jenkin, he talked extensively about the form. It would be easy to list the film’s virtues (the cinematography, the soundtrack, the outstanding performance from Mary Woodvine). However, the true greatness of the film lies in the fact that the director, writer, cinematographer, editor and sound editor managed to work together to form a masterful and cohesive work.

The fact that Mark Jenkin handled all those tasks might have facilitated the process. Pierre Larvol suggested in his favourable review that Enys Men is not a puzzle where you are supposed to reassemble the pieces but rather get lost while looking for them in a crazy, creative, and folkloric maze, out of time. It’s an apt description of Jenkin’s work. It should be added that “getting lost” actually leads you not to lose anything but rather to find cinema in its truest and purest form. If Bait was a handwritten love letter to cinema, Enys Men is yet another meticulously crafted piece of work that displays what film is capable of once it shreds its narrative crutches.