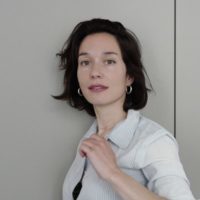 The opening film of the Semaine de la Critique this year in Cannes was a debut film called Robuste (reviewed here). I had the opportunity to conduct an interview with Constance Meyer (director) and the female lead, Déborah Lukumuena.

I would like to start with you, the director. What was the origin of the project?

Constance Meyer: The origin of the project was that I wanted to film with Déborah and Depardieu together, and I also had this image in my head of a man fainting in the arms of a woman. I kind of built my whole script on this image.

I see. You mentioned Depardieu. Was it obvious to get him in the part in a debut feature?

CM: I had both actors in mind from the start. I had directed two shorts with him (Rhapsody and La belle affaire), so it wasn’t our first time working together.

I was thinking about the look of the film. There were some striking choices in the use of colour. I like the scene where Aissa loses the fight, and then when she gets up, you just see the orange mat cover the whole screen. It is pretty striking. Could you tell me how you thought about the cinematography?

CM: I wanted to have some contrast that looks like film even though it was shot digitally. I talked with my DP a lot about contrasts, about feeling the bodies. Our conversation was more about texture than about colour. And also about framing—especially their bodies and their faces.

Thinking about the title and what is robust or not, I want to talk about the central sequence in the film. The one that takes place in a restaurant where you sense the strength of Aissa, but this is also the scene where both of their facades crack. Could you talk about how you envisioned that scene?

CM: I perceived it as the climax of the film. It’s true what you say about the crack. After a while, you can see the vulnerability of both characters. George is very intrusive and violent, and what he says hurts her, but when she talks back, Georges doesn’t know what to say either. Aissa knows deep inside what her relationship is like, but it’s still painful when it’s said out loud, and she reacts to that.

It’s a great scene and also wonderfully acted by all of the three actors. Did it take a long time to shoot that sequence?

CM: It took a day. In the morning, we did the part with Aissa and Eddy, just talking and flirting. Then in the afternoon, we shot the arrival of Georges and how he just makes everything fall apart.

So if I turn to you Déborah, what was this project like for you? I imagine this film as a different experience from Divines, where you acted with the Mille Visages group. I also saw you in Call My Agent, but still, I assume it’s something else to star opposite Depardieu.

So it became a personal experience as well?

DL: Yes, and spending all this time with him, looking at him, watching him and listening to him made me think about his career and his work and the industry, and what I want to become.

So how did you prepare for the performance?

DL: We talked about the movie for a year, so I had time to think about her and picture her process. I knew the scene you mentioned would be the climax of it. I knew that she had to go through this story with a certain calm and evolution that will happen over time. I think it was almost like a natural reaction at the restaurant because George is crushing her dreams and the image of love she kept for herself. And that’s the moment she chose just to stop all of this because it was too invasive, and he is the worst person to teach someone anything about life.

CM: I thought about something that I think everybody experiences, which is that sometimes you’re in love with someone or you have a relationship with someone, and you know that you and the other person don’t have exactly the same motivations. That’s very common, but I always thought that in movies, you always see love stories that are completely passionate and mutual. In real life, that rarely happens. It’s always more complicated.

So any new projects coming up for you, Déborah?

DL: Yeah, but they’re still in production. I won’t talk about that.

They are all secret?

DL: Yes, they are all top secret. (Laughing)