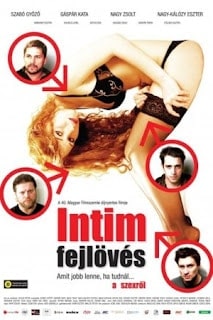 Intimate Headshot (Intim fejlövés 2009) is the debut feature, written and directed by Péter Szajki, and it won the award for Best Debut Film that year. (shared with Simon Szabó for Paper Planes (Papirrepulök). It’s a film divided into four episodes where the nodal point is the strip club where the four male protagonists will eventually end up. The stories revolve around sex and intimacy as well. Ironically, Szajki co-directed The Pierre Woodman Story about the famous French pornographer the same year. Intimate Headshot was made on a low budget, but still features seasoned actors like Gyözö Szabó and Tibor Gáspár.

The camera acts as a voyeur in the credit sequence, following a woman in a far too low skirt. In the first story, Ákos, who has been chatting with younger girls online for some time, eventually meets one of them called Gabi. That is not the whole truth about the situation. Gábor is marrying Éva, but she has a secret she hasn’t told him yet. Tomi (Lehel Kovács from Nyitva) is the first resident in an apartment complex. Soon Kati becomes his neighbour, and he’s trying to get close to her. In the final story, Bálazs finds out that his wife Hajni is having an affair with his best friend. He goes there to try to do something about it.

What is an Intimate Headshot?

Szajki tells the stories one by one, but occasionally they are intertwined. It is a film that largely depends on the writing. Szajki is not afraid to make things awkward or downright painful, and all four stories contain violence of one kind or another. Ákos is living a lie and thinks he can have his cake and eat it too. Gábor is trapped in his narrow-minded views. Tomi is highly immature, and it turns out that his mother even chooses his new furniture and also encourages him to seek out Kati, which causes unexpected consequences. The last story about the affair, seemingly the direst one, might actually be the one that has a constructive solution in sight.

Too much shouldn’t be divulged about how the tales unfold, but there is always embarrassment and pain involved. The crude language in the dialogues matches the different topics of the film. It’s often unpleasant to witness the interaction between the characters. The actors are all excellent in delving into some highly uncomfortable situations. It’s a mature film in every sense of the word, not only in the numerous scenes from the strip club. Péter Szajki has since directed two other features that I haven’t seen. For anyone interested in cinema burrowing into the awkward and hidden corners of our mind, Intimate Headshot is well worth seeing.