Troubled Minds in the art world 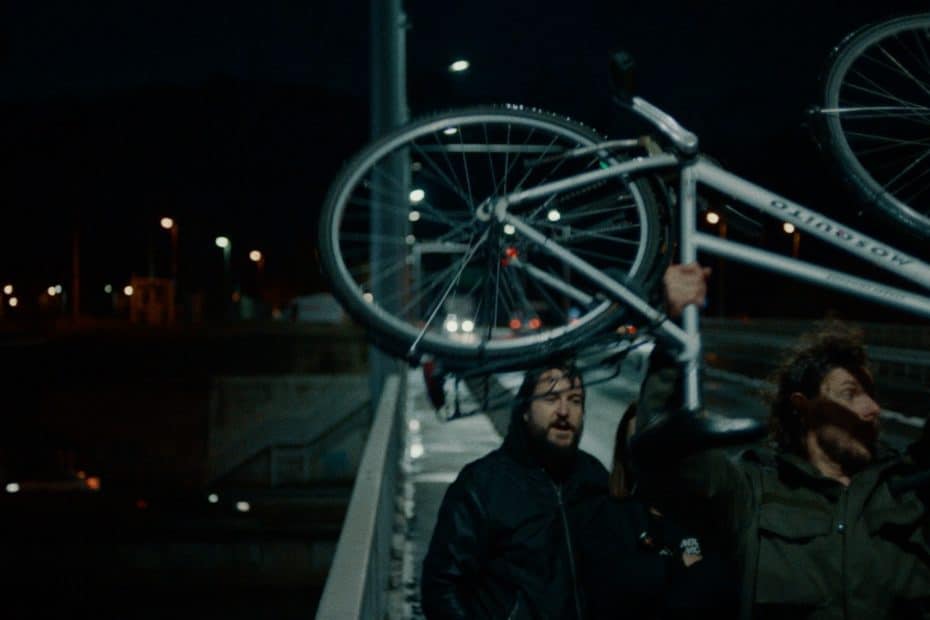 Who are the actual Troubled Minds?

Festivals make you experience films in a specific way, and films can easily reflect upon each other unintentionally. During the Black Nights Film Festival, I saw a film that was in black and white and ticked all the boxes of what an arthouse film should be like. Beautiful images, people carefully arranged in the frame, and incessant rain. Béla Tarr was mentioned as a reference, but to me, the whole thing came off as a parody of an arthouse film, or like a film student trying to show off to his teacher. I felt I needed a detox, and serendipity in the form of the PÖFF selectors came to the rescue since the following film was Troubled Minds (Nemierīgie prāti).

The first feature, directed by the Latvian brothers Lauris and Raitis Âbele (who I interviewed), with cinematography by the third brother Marcis, turned out to be something completely different. The synopsis read, “Brothers Robert and Martin are a month away from their largest art exhibition. To get the creative juices flowing, Martin locks himself in a black cube. Once out, brothers fall into a wild rollercoaster of events existing on the very edge of the chaos. The film examines the thin line between the artists’ creativity and mental troubles,” There is no lack of films that try to satirise the art world. Ruben Östlund’s The Square (2017) comes to mind, which was a film that fell flat for me.

If one finds The Square too flat and two-dimensional, a cube might be the solution one is looking for. Early in the film, we see Martin enter the black cube. It is said that it symbolises isolation from world affairs, and Martin says afterwards that he lost his sense of time there. The gallerist, Gunnar, to whom they are supposed to present their work, makes fun of the black box. The brothers don’t seem to have a firm grasp of what their exhibition will be about. They indulge in drinking and sex orgies. Even though it’s a behaviour we’ve seen in many other films, it still has an air of freshness, no doubt due to the performances.

We see a half-naked woman performing an act with a parachute, sprayed in black like a Rorschach test. The part is played by the artist Daniela Vetra who seems to be quite infamous in her own right, in Latvia. She is the most captivating of the artists we encounter. The main topic of the film is mental illness. The project came about since the brothers have a friend who is bipolar. This is reflected in Martin, who is the more unstable of the two brothers and whose behaviour becomes more and more unpredictable, and suddenly he is gone. He has an obsession that the magnetic poles will reverse soon. Did he possibly go towards the North Pole?

It turns out he went on a very straight trajectory up north. The same can not be said about the film that, in many ways, defies description. My inept attempt above doesn’t come close to capturing what this film is about. In some ways, the frenetic style of the film’s first half echoes the characters’ mental state, but not in a simplistic way. At one point, Gunnar tells the brothers, “You bring back a healthy sexuality to the art world”. That is true of the film as well. It’s not surprising to learn that the women in those scenes were quite proactive while preparing them.

When I left the cinema, I wasn’t sure what I had just watched, and that was an exhilarating feeling. It’s a film that stands out from the crowd, not by trying to be different in a juvenile way, but through its honesty and humane and intelligent treatment of the topic. Raitis Ābele is a psychology student and is working on his PhD right now. This is a work that is not afraid to think outside the cube and occasionally feels chaotic, but it never loses its grip on the spectator, at least not this one. The film will surely be polarising, and not everyone will find it easy to digest.

Two films came to my mind during the screening. L’Intrus (2004) by Claire Denis and Eri Eri rema sabakutani (2005) by Shinji Aoyama. Not in the manner that it resembled those works, but that the effect on me was similar. I still have vivid memories of the first screenings of those films, and how confused and excited I felt at the same time. A quality that is all too rare in today’s cinema. For that reason, and others, I hope that Troubled Minds will conquer as many festivals and other cinemas as possible. It might not win any awards but could prove highly rewarding for the spectator who is game. I will follow the Âbele brothers in the future.