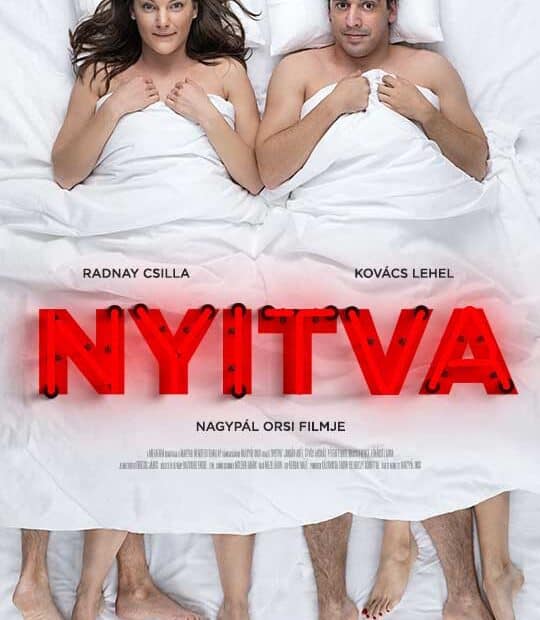 Readers who have followed my Hungarian Thursday (Magyar Csütörtök) cycle for some time know that this is my very first entry in the series. It is intended to highlight one Hungarian work every Thursday. The choice of the day is not a coincidence, since it’s the day when films open in Hungarian cinemas. Incidentally, Open is also the first Hungarian Thursday title. It is directed by Orsi Nagypál who went to London Film School in 2009. Since then she has made some shorts but mainly worked in television. She directed 8 episodes of Térapia1 Térapia was the Hungarian version of the Israeli series BeTipul. The American version was called In Treatment., and she was involved in other series as well.

In 2018 it was time for her first feature, Open (Nyitva). The title refers to open relationships. In the initial scene, we meet Fanni (Csilla Radnay), who works as a marriage officiant. When the couple is told to kiss, they go way overboard. Cut to Fanni coming home to meet her boyfriend Bálint (Lehel Kovács) under less passionate circumstances. She finds him in bed with his trousers on. Later she sneaks into the shower to masturbate but is caught by Bálint. He suggests that she should do it in front of him, but she refuses. The following day she visits Bálint at work and finds him with a young nurse. He admits that he likes her but that nothing happened.

10 minutes into the film, we’re subjected to a steamy bathroom sequence, meaning that the couple uses the steam on the mirror to depict their sex life through their five years together. They draw not only a falling chart but also the conclusion that something needs to be done. Hence the couple will try out different methods to spice up their life, including sex therapy, a swingers club and other things. If one has seen other Hungarian comedies, such as Sex And Nothing Else (Csak Szex És Más Semmi 2005) by Krisztina Goda, it is not surprising that the sex talk is quite frank and often hilarious. Some of the crassest lines are delivered by their friend Eszter (Adél Jordán).

The film could be defined as a dramedy or rom-com. In some ways, it expands the horizons of those genres. Even though the film is a comedy at heart, it was first conceived as a drama. After struggling with the material for some time, the director decided that a comedy was the proper form for the story. It still aims to dig into the psychology of the characters. Nagypál has worked with cinematographer Herbai Máté several times, and the lensing is congenial with the subject matter. There may not be that many cinematic flights of fancy, but occasionally the way the apartment is represented mirrors the theme in an interesting fashion. Scenes from the clubs are likewise quite striking.

The story is punctuated by the different ceremonies that Fanni conducts, which also displays different facets of liaisons through the couples that get married. However, these scenes also reveal Fanni’s state of mind depending on where she is in her own relationship. A simple yet elegant way to widen the scope of the topic. Csilla Radnay is an experienced theatre actress, but this is her first leading role in a film. She is more than up to the task, as is Lehel Kovács, who has more credits in several films. Together they come through as an everyday couple, without any disturbing movie star antics. Bori Péterfy is also memorable as a friend who lives in a non-monogamous relationship.

Yet another comparison could be On Body And Soul (Teströl És Lélekröl 2017) by Ildikó Enyedi (also shot by Máté). Not only for the blunt sex talk but also for the way the couples are presented. Eszter and her husband Ernö, a colleague of Bálint, bear some resemblance to Jenö and his wife in Enyedi’s film. In both cases, the women seem to be in charge of things, even if Eszter complains about having to handle the kid on her own. Written and directed by Nagypál, the story is obviously seen from a female perspective. The digs at men are still done with a healthy sense of humour, and it’s definitely a film that is made with an open mind.

The film is available on Netflix in some European regions.