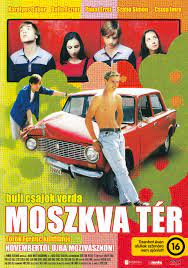 Moszkva tér means Moscow square and is the name of a famous square on the Buda side of Budapest. Or rather, it was. In 2011 it was decided that it would be renamed Szell Kálman tér, which was the name it had before the communist government changed it in 1951. When the communist rule collapsed in 1989, most of the streets and squares regained their original names. November 7 tér became Oktogon, Népköztársaság út (People’s Republic street) became Andrassy út, and so on. For some reason, Moscow square kept its name for 22 years. In 2001 Ferenc Török released his first feature, called Moszkva tér. It became an immediate cult classic.

The year is 1989, a pivotal year in Eastern Europe and Hungary is no exception. It’s a year of political turmoil, but that’s not what’s occupying Petya and his friends. They want to party, meet girls and make money off some shady business. The latter was rampant in the final days of communism in Hungary. Those of us who spent time there then, know that there were already hints of capitalism with an Adidas shop and a McDonalds, among other things. Those were not the places where young Hungarian students would hang out, though. Török (who was 19 in 1989) depicts a world around Moscow square on the Buda side.

The film begins in April, and we see Petya and his gang looking for the coolest party. They will crash one (almost literally) but complain that it is full of nerds. Throughout the film, we will follow Petya with friends and family. The storyline is not what makes the film so likeable, but it’s the carefully observed realities of the era. As a foreigner in those days, it was impossible to enter a taxi without being bombarded by offers from the driver to buy goose liver, spirits or something else that could give him Western currencies. (Not that the Swedish Krona was the most popular one). In the film, a taxi driver charges whiskey from the students.

The bleak reality of Moszkva tér

What Török manages to convey, seemingly incidentally, is the corrosive corruption that permeated every pore of the society. One of the main plot points is that the exam results were leaked, which actually happened. The government tries to counter this, but we learn that the teachers are no strangers to cheating either. Zsolt Kóvacs excels in the role of the jaded teacher. (He also played the father in Gábor Reisz’ debut feature For Some Inexplicable Reason (Van Valami Furcsa és Megmagyarázhatatlan 2014 which was that year’s generation’s tale). Train tickets could be forged as well, which gave the students a chance to go abroad. The world was there for the taking, for those who didn’t bother about following the rules.

Moszkva tér remains one of the most beloved films in Hungarian cinema history. There are many reasons for that. It doesn’t shy away from the most important moments of 1989 in Hungary, like the death of János Kadar or the rehabilitation and reburial of Imre Nagy, but it shows them in the background. The film never loses sight of the youngsters and how they had to manoeuvre their teenage years through the political turmoil. Once again, it’s a film that is hard to describe but easy to enjoy when you actually see it. It was re-released a few years ago in a beautiful edition. The Freak-Burger place in the square may not exist anymore, but the themes remain topical.