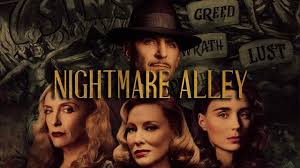 There will be spoilers for both versions of the film in this review.

The novel Nightmare Alley (1946) was written by William Lindsay Gresham. The following year it was adapted into a film by Edmund Goulding. The bleak storyline didn’t appeal to the audience. Nevertheless, Tyrone Power, who was eager to challenge his screen image as a romantic lead, referred to it as his favourite film. A decade later, the film was re-released and encountered more success. In 2021, Guillermo del Toro released his version of the story. He claims it is a new adaptation of the novel rather than a remake. It’s a questionable statement, but at least he is not going as far as Luca Guadagnino, who labelled his remake of Suspiria “A Cover version with six acts and an epilogue”.

Some similarities between the films might point to some tendencies in recent cinema. Both remakes are considerably longer than the originals. The question is if the extended running time serves the films or not. Is it yet another case of a bloated movie where the running time merely shows a lack of restraint? Nightmare Alley is the story about Stanton Carlisle (Bradley Cooper), who, by chance, stumbles on a carnival and starts working there. He begins with simple tasks but quickly rises upwards thanks to a mind-reading act involving a code system that he learned. He later leaves the carnival with Molly (Rooney Mara), who will become his assistant during the act, which will now be performed for the elite.

The American dream and The Nightmare Alley

One of the main aspects of the story is the role of the geek. A sideshow attraction that was common at the time and involved a broken man committing heinous acts in front of a crowd that seemed simultaneously shocked and amused. Gresham learned about this phenomenon while he volunteered during the Spanish civil war. Another central theme is alcoholism which Gresham knew far too well. During one of his performances, Stanton meets a psychologist, Lilith (Cate Blanchett), who immediately calls him out on how the act is done. Still, when she tries to trick him, he manages to turn the tables on her. This is the moment where the film ostensibly takes off.

One of the interesting implications is that the carny act and the profession of psychology may not be that far apart. In the 1947 version, Lilith was portrayed by Helen Walker, following her marvellous turn in Lubitsch’s Cluny Brown (1946). Nightmare Alley displays another side of her considerable talent, making Lilith ruthless but perfectly controlled. Cate Blanchett goes for another approach. According to the director, he asked her to act in a feline fashion. The result is a highly mannered presentation, not unlike Stanton’s act. The outcome is that the spectator gets the sensation of someone trying to act out what she has seen in other, more successful noir films. This is a clear indicator of the film’s major problems.

Except for Bradley Cooper and Toni Colette, who constantly seems to rise above the material she appears in, many of the interpretations come off as duplicates of other performances. It’s not necessarily the thespians’ fault. Other elements in the film feel the same. The cinematography and the production design are both technically outstanding, but the different elements of the film, however splendid they may be, never gel into a coherent cinematic whole. Lilith’s office, for instance, courtesy of Tamara Deverell, looks like a gorgeous set from a French silent film or some Frank Capra film. It comes as no surprise that the director stated in an interview that the film was lit for b&w and that such a version exists.

The 2021 version is approximately 40 minutes longer than the previous iteration, making it one of all too many films that are all too long nowadays. One scene absent in the original (but which appears in the book) is when Clem (Willem Dafoe) explains at length how a geek is created. For two minutes, Stanton and the audience are treated to a detailed description of each step, seemingly for the only reason so the spectator will be able to recognize the process towards the end. This lack of trust in the audience’s ability to tie things together themselves is not rare in today’s cinema, but that doesn’t make it less annoying.

For all its qualities, Nightmare Alley is indicative of several problematic aspects of cinema today. One could point to several other recent examples like The Lost Daughter, which is still an accomplished work in many regards but ultimately doesn’t deliver its intended effect. A more striking comparison, albeit with an older film, would be the wildly overpraised LA Confidential (1997), where the noir feeling felt as artificial as the surgically enhanced prostitutes who had to emulate movie stars to keep on working.

In his legendary trashing of Orfeu Negro (1959), Jean-Luc Godard asked, “What would the Concerto for Clarinet be without Mozart? What would the Head of a Girl be without Vermeer? And the reveries of Rousseau without Jean-Jacques, the music of Beethoven without Beethoven, Aragon’s prose without Aragon?” In that vein, I feel compelled to ask what a Coen Brothers film would be without Joel and Ethan. It might very well be Nightmare Alley.