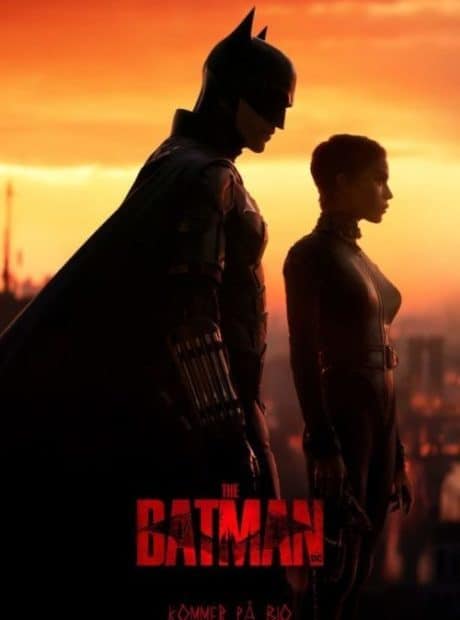 The Batman is directed by Matt Reeves. I saw the director’s debut, The Pallbearer, in Paris in 1996. It’s safe to say that the director has diverted from the path of that style since then. In 2010 he directed the remake of Let The Right One In (Låt den rätte komma in 2008), which wasn’t all that impressive. This is not the first adaptation of the famous comic book character. Following Tim Burton and Chris Nolan, this is a reboot, deboot or whatever. There was, of course, the dreaded Joker (2019), which leaned heavily on The King Of Comedy (1982) and Taxi Driver (1976) and is best forgotten.

The Batman is set at a time when Bruce Wayne (Robert Pattinson) has been fighting crimes for two years alongside lieutenant Gordon. When the mayor of Gotham City is brutally murdered, the killer leaves a message for Batman. When a police commissioner is murdered, yet another note is left. The Riddler seems to be killing people in power and doing so for a specific reason. If this sounds overly familiar, it’s because it is. If one were to look for the equivalent of the aforementioned Scorsese film in relation to The Batman, Se7en (1995) would be an obvious candidate. The earlier the film comes to your mind, the more predictable the murder plot will feel.

It could, of course, be said that the plot means less than the dive into the mythology. One of the clues leads Batman to a nightclub where Selina Kyle works as a waitress. Since there is no attempt to outrank the ultimate masterpiece Catwoman, the character once again goes under her original name. As portrayed by Zoë Kravitz, she is a welcome presence in the film with strength and sexiness in equal measures that is not merely there for woke reasons. A more curious turn comes from Colin Farrell as The Penguin. Not that it’s a bad performance, but since both his appearance and voice are unrecognisable, it could have been performed by anyone.

The Batman works reasonably well as a cinematic spectacle even while being overlong. The visuals are consistently appealing and occasionally striking. The initial murder (preceded by a fake murder) bears a clear sign of Argento, especially Profondo Rosso (1975). While the film is dark, there are way more nuances in Greig Fraser’s cinematography than in his recent Oscar winner. As in most recent comic book adaptations, there is an overly serious feel to the proceedings, reminding the spectator that this is not merely entertainment but something more turgid significant. The Patman portrays the character with a large emo chip on his shoulder. Near the end, there is a hint that a particular, funny character will appear in a sequel.

The Batman may not be a game-changer, but it ticks along reasonably well. One might have asked for fewer Fincher references and more Argento ones, but that’s the nature of cinema nowadays.