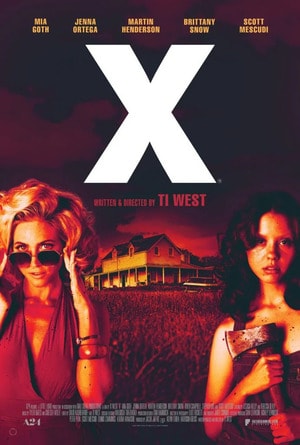 Ti West was born in 1980. X takes place the year before he was born. There is no lack of works with a retro feel, especially when it comes to genre films. Sometimes those films look back to the filmmaker’s childhood, like Kenneth Branagh’s Belfast. Even more common are films that merely revisit old styles in a, more or less, cinephile fashion. When the French directors of la nouvelle vague went this route, one of the objectives was to pay homage to films that weren’t necessarily appreciated at the time. More recently, it hasn’t always been evident what the driving force is behind those movies. A prime example is Once Upon a Time in Hollywood (2019).

X begins with the police arriving at a farm where there has been severe mayhem with several dead bodies. Then, the film flashes back 24 hours to reveal what happened. We meet a film crew who goes to a farmhouse to shoot an adult movie, unbeknownst to the old couple who own the place. When one of them, Howard, points a rifle toward the producer, Wayne, it’s clear that things won’t end that well The producer, Wayne claims that he wants to make an arty porn film, but the primary purpose is still to take advantage of the upcoming home video market. We see them shooting scenes where all the actors seem to be enjoying themselves considerably.

One of the actresses is Maxine (Mia Goth), and at one point, Howard’s wife Pearl watches her through the window while she is performing in a sex scene. Pearl is fascinated, not merely by the act, but it’s like she senses a connection between them. In Howard and Pearl’s house, their TV constantly plays an evangelist ranting about sin. Where will this story be heading? This is certainly not a match made in heaven.

It goes without saying that the film is full of film references and gags. One of the best comes in the first shot, where the police arrive. The film appears to be in the academy ratio, presumably as a misjudged attempt at referencing older cinema. When the camera moves forward, it turns out it was an open door framing the shot, and the film will be in widescreen. Other references occur in the dialogue, some of them being a tad obvious, like a Psycho reference when one of the crew members wants to change the script halfway through the film. West’s fascination for the horror genre is evident, but does he have anything new to say about it?

X is entertaining for an hour or so, but then the suspicion creeps up on the viewer that there is little going on under the visceral elements on the surface. With the meta-film context being pushed so hard, there is a surprising lack of reflection going on, and there is not much to ponder over once the screening is over. The shameless attitude to sex and porn is more than welcome, and the fact that the story is set in the past might be significant in that regard. The actors are all good, with Mia Goth being the standout element, even if Maxine is not sufficiently fleshed out. She is ironically underused and overused at the same time.

While shooting X, the crew made a prequel about Pearl in her younger days (A Pearlquel?). It is set in 1919 and will star Mia Goth as Pearl. How you feel about the casting of Pearl in X will impact how you view the film. To me, it felt like something that’s been done too often recently, even if it opens up new possibilities. Mia Goth is a supremely interesting and brave actress. One wishes that someone would write the role that she deserves.