Who the Hell’s Bonnie and Clyde? 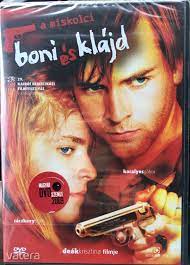 Who the Hell’s Bonnie and Clyde? (A miskolci boniésklájd 2004) is the fourth feature by Krisztina Deák, who is also known for Jadviga’s Pillow (Jadviga párnája 2000), based on Pál Závada’s classic novel. Závada is the author behind Natural Light as well. Deák’s film is based on actual events that occurred in Hungary a few years before the film was released. Lászlo Fekete and Tünde Novak robbed a bank and subsequently planned a second crime while money was running out. They became known as the Hungarian Bonnie & Clyde. Novak would later write a book about her experience, which became the basis for Deák’s work. The author couldn’t attend the premiere for a very particular reason.

The cinematic concept of criminal couples on the run is obviously not new, even if the most famous examples are American. It is tempting to draw comparisons to Jan Troell’s masterpiece Il Capitano (1991) for a Swedish cinephile. I have no clue whether Deák or screenwriter Krisztina Esztergályos was familiar with Troell’s film, which was controversial at release in Sweden since many people felt that the true story was too recent in time to be fictionalised. There are some similarities in the stories. In both cases, the female protagonist was fond of animals; rabbits in the Swedish case, where the animal’s droppings functioned as clues for the police, and cats in the Hungarian one.

In both cases, it’s the guy who commits the violent acts. Tünde Novak was only 16 years old when she met Låszlo in a pretty dramatic fashion. The relationship between the two is at the core of the fractured narrative rather than the crimes. Tünde wrote her book in prison, where she served her sentence until 2009, when she was released for good behaviour. She came out very regretful and apologised to those harmed by the couple’s actions. I haven’t read the book, but the film doesn’t fall into the trap of making the couple heroes or victims, even though Tünde came from a poor home with a generally uncaring mother.

The style of Who the Hell’s Bonnie and Clyde?

From a cinematic point of view, the director has surrounded herself with veterans like Tíbor Máthé, responsible for the lensing in several of Ildikó Enyedi’s films. The images are constantly compelling, with an extra punch in the scenes in prison. The non-linear narration likewise serves the film well and never comes off as gimmicky. The style works in conjunction with the story throughout, including Ferenc Darvas’ music. He may be primarily known from the theatre world but has scored a number of films as well, notably Eldorádó (1988) by Géza Bereményi and Szökés by Livia Gyarmathy. Who the Hell’s Bonnie and Clyde? was the first feature editing assignment for Mano Csillag, but he performs the task like a star.

Judging from the performance of the two actresses playing the titular role in Aglaja (2012), Déak has a good hand with thespians. The film was the first and last performance by Ildikó Ráczkevy, who would later become a lawyer. She delivers a nuanced performance in an almost impossible role. Besides the main actors, Gabriella Hámori (who voiced Mimi in Ruben Brandt, Collector is unsurprisingly perfect in her role as a couple’s friend. Who the Hell’s Bonnie and Clyde? may be Krisztina Deák’s strongest film to date, and delivers a lesson on how to deal with real criminal cases without glorifying or pitying the perpetrators. The reviews were mixed upon release, but it is definitely a work worth seeing.

The film is available on Videa.hu without subtitles.