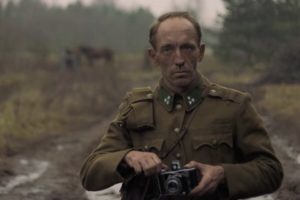 Natural Light (Természetes fény) is the debut fiction feature of Dénes Nagy. It is based on the eponymous novel by Pál Závada. It’s not the first time that one of his novels has become a film. In 2000 Jadviga’s Pillow (Jadviga Párnája) was adapted into a film by Krisztina Déak. Nagy doesn’t film the entire novel. Nowhere near, in fact, since the book depicts 20 years of the protagonist corporal Semetka’s experiences, whereas the film takes place in merely three days. It’s a WWll story set in the occupied Soviet Union where we follow a Hungarian unit tasked with finding partisans. After an attack that kills the commander, Semetka becomes the head of the group.

Nagy is previously known for his documentaries, the most famous being Another Hungary- Life of a VIllage- Fragments (Másik Magyarország 2013). It is a documentary that is cooly observing without reaching any obvious conclusions. Like Natural LIght it was lensed by Támas Dobos and both films rely on the images to propel the film rather than a facile narrative. We follow the soldiers routinely robbing the villagers of their food and even having soup that the villagers prepared for them. While the Hungarians are eating, the natives look at them in silence. The difference between them is all too clear, without any need to resort to simple tactics as in Mr Jones. Subtlety is the name of the game here.

The Power of Natural Light

The film was presented at this year’s virtual Berlinale, meaning that critics had to watch the films at home. That might be beneficial for films that would actually look horrendous on a big screen. A possible explanation for all the praise heaped on the astonishingly awful Radu Jude winner, Bad Luck Banging or Loony Porn (2021) which is virtually unwatchable in a cinema. However, it’s obviously detrimental to a film like Natural Light. Initially, all you see is different shades of brown that gradually give way to a more varied colour palette which includes shades of green. Tamás Dobos’ (who also lensed Apaföld ) camera stays close to Semetka while whatever action there is, happens off-screen and on the soundtrack.

The result is a work that’s immersive while being simultaneously distancing, not unlike Nagy’s compatriot Miklós Jancsó. When it comes to the storyline it’s more similar to András Kovacs’ classic, Cold Days (Hideg Napok 1966). A late conversation between Semetka and his superior could be taken from Paths of Glory (1957) but without the overbearing moralising and sentimentality of that film. Nagy’s work is more about the inevitability of war. Things just seem to happen according to their own rules (like in The Round-Up) and nobody reacts to the consequences in a visible way. The cast is comprised of amateurs from Hungary and Latvia, where the film was shot, which might account for the lack of mannerism in the performances.

During an era when there are heated discussions about how films should be seen, here comes a work that is an obvious cause for the Villeneuve side of the argument. With the staggering non-flashy beauty on display here, I can’t even imagine what the experience would be like, watching this film on a TV screen. It would probably feel like driving a speedboat in a bowl of Goulash soup. It’s quite disheartening to witness the number of people who are content with watching films (or rather “content” ?) at home on a minuscule screen. It will clearly never be able to rival the experience of watching a film in a real cinema. A fact made abundantly clear by this film.