The Story of My Wife 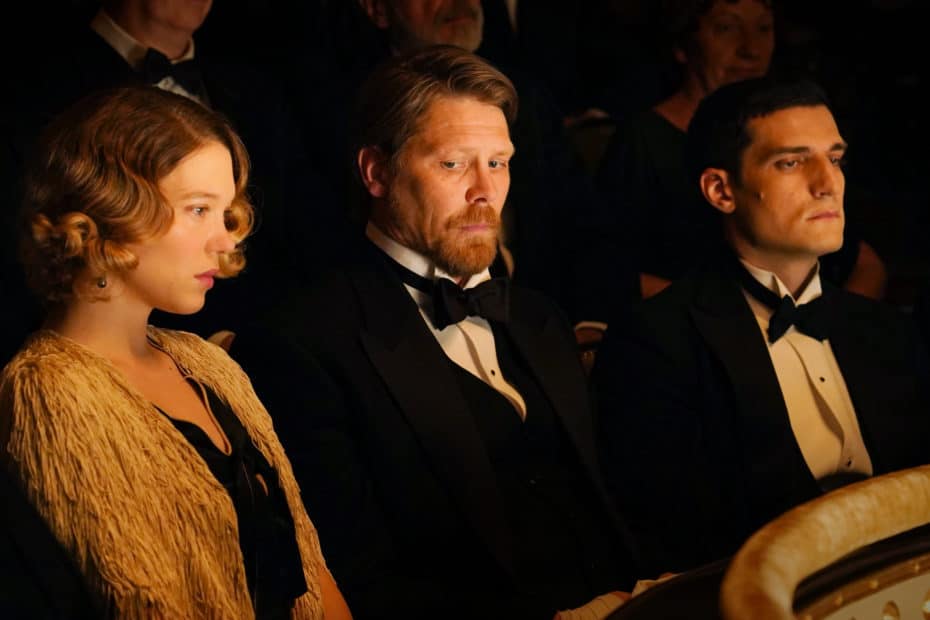 The Story of My Wife is the long-awaited new film by Ildikó Enyedi. Presented in the competition at Cannes. It’s an adaptation of the eponymous book written by Milán Füst, which was published in 1946. The subtitle reads, “The reminiscences of captain Jacob Störr”. He is the narrator of the story about how he makes a bet with a friend to marry the first woman that enters a café. Enter Lizzy, who accepts the proposal, and the story begins. Jacob spends lots of time at sea and seems more at home there than on dry land. He is obsessed with the thought that his wife is unfaithful.

The Story of my Wife is no story

The book is told from his point of view, but rather than telling the promised story, it’s more of a stream-of-consciousness inner monologue. The title is clearly ironic. There is not much storytelling going on here, but rather an impressionistic look into the possibly warped mind of a man with a tough exterior. It’s been a favourite novel of the director for decades. Adopting such a work raises considerable challenges. Should the first-person narration/rambling be kept, or should different means be employed? Enyedi chose the latter. Apart from an opening statement by the captain, the film is not narrated by any character.

The film doesn’t shy away from its literary origins but rather stresses those aspects of the work. It’s divided into seven chapters whose titles fill the entire left side of the screen. Those chapters are not from the book but are the director’s invention. The dialogue is not always that naturalistic but could be described as Oliveiraesque, in want of a better term, filled with philosophical musings and lofty statements. It’s a perilous path that the director (who also penned the script) has chosen. Finding a cinematic equivalent to the verbose novel is a strenuous task with no obvious solution.

The story is inspired by the legend of the Flying Dutchman. Maybe that is the reason why Raoul Ruiz came to my mind while watching the film. In 1983 he made The Three Crowns of a Sailor (Les trois couronnes du matelot). A surrealistic tale based on the Chilean myth of the Caleuche ghost ship, which is a variant of the legend in many ways. Enyedi’s style doesn’t resemble the style of that film as much as it reminds a perceptive spectator of the director’s Proust adaptation Time Regained ( Le Temps Retrouvé 1999). A highly handsome adaptation of the last part of Proust’s À la recherche de temps perdu, which was still slightly conventional by Ruiz’s standards.

It’s not a love story; it’s a story about love

The weird tagline for Malcolm & Marie (2021) is more earned by Enyedi’s work. Sure, the story aspect could be debated, but we are dealing with a film that aims to cut to the heart of the fragility of relationships. In that regard, it could work as a companion piece with Annette, but with the utter darkness of Carax’s film replaced with a more wistful but eventually accepting manner of acknowledging that life doesn’t always turn out the way you expect. The aforementioned Manoel de Oliveria’s Francisca (1981) comes to mind. If the references are old, it’s because The Story of My Wife doesn’t feel like a new film but an undiscovered gem from an older period.

Gijs Naber appears in virtually every scene. He was a last-minute replacement, but he embodies the role beautifully. In a film where the themes are displayed in furtive glances and the mise en scène, rather than the dialogue, the actors play a different role. I was slightly apprehensive of the French casting, but Léa Seydoux is livelier than she’s been in some time. The role is much smaller than the title suggests, but she seems to relish every moment of it. The real star of the film, however, is Marcell Rév. The DOP, who incidentally once was Enyedi’s student, surpasses himself with arresting images that are gripping from start to finish.

In Hungarian cinema, he is known for his work with Mundruczó, but he also worked extensively abroad in the above-mentioned Malcolm & Marie and Euphoria. The warm-toned images combined with the blocking and editing result in a magnificent piece of cinema that is rarely seen nowadays. That might be a substantial problem. If the film resembles masterpieces from the past (the most obvious resemblance being Orson Welles’ The Immortal story 1968) rather than a work of 2021, what options does it have? Will it find its audience, or will it be drifting around at sea without finding a cinema harbour? I hope for the former. Prospects are higher in Europe than in Anglo-Saxon territories, for sure.