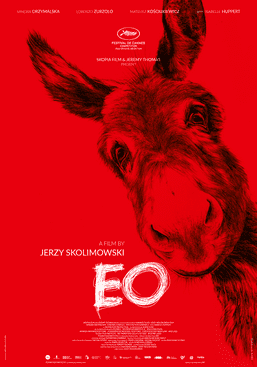 EO is the latest film by Jerzy Skolimowski. It had its world premiere in the Cannes competition this year, and it’s the director’s first since 11 Minutes in 2015. As in Bresson’s Au hazard Balthazar (1966), we will follow the titular donkey throughout the film. Still, this is far from an imitation or a simple Donkey see, donkey do, and other references would be more fruitful than Bresson’s film. We first see EO during a circus performance. From the way the scene is shot, it takes some time for the spectator to understand where the events occur. Later, the circus encounters some hysterical animal activists in Wrocław who “liberate” EO, and from there on, a treacherous journey will commence.

One of many significant differences from Bresson’s film is that there are no human protagonists that we are supposed to keep track of. The determining component of the film is the donkey, but above all, the cinematic depiction of the events. Fate, in the form of the festival programming team, decided that I watched EO a few hours after seeing The Woodcutter Story, creating the vibrant feeling that cinema was alive, well, and even thriving (an illusion that the rest of the festival would quickly wipe away). Regarding EO, “the events” mentioned might be cinema itself. Skolimowski is, in many ways, a formalist, which instantly makes him more intriguing than most filmmakers working today, with a few exceptions.

The aforementioned 11 Minutes comprises several characters who, in one way or another, will be connected during the time frame when the film is set. Skolimowski has said that the finale was the film’s embryo, and the challenge was how to arrive there. The separate stories are not that compelling in themselves, but there is a sensation that another, more mysterious film is flowing somewhere underneath. A dead pixel on a screen might possibly be one of the essential facets of the film. With EO, the feeling is that the director managed to shred the superfluous narrative tools and instead utilise all his powers to create unadulterated cinema.

Skolimowski provides us with a view of the world with an altering eye. If any references should be made, Kubrick is the one that comes to mind, in particular, 2001 – A Space Odyssey. Both directors share a profound interest in the cinematic form; where Kubrick said towards the end of his life that he would have liked to have changed the form more than he did. Most importantly, their films are devoid of sentimentality, which occasionally confounded the audience and the critics alike. Accusations of “coldness.” were frequent. In a festival where films Dhont shy away from excessive sentimentalism, EO comes off as even more refreshing.

Once again, we have the situation with favourite films being the most difficult to describe. Skolimowski has been one of my (few) Polish favourite directors for a long time, and the expectations of EO were very high, and they were met and even surpassed. The exhilaration came from the fact that one didn’t know exactly what to expect and that the director was invested in the cinematic aspects of the film rather than some simplistic message. Still, numerous viewers and critics felt compelled to make comparisons with films like Gunda (2020) or Cow (2021) or claim that the film is about man’s treatment of animals. The need to reduce a complex film to a simple statement is puzzling.

Skolimowski is obviously not the sole creator of the film. Cinematographer Michał Dymek creates staggering images with acrobatic camerawork, rendering the film an intelligent spectacle. The score by Skolimowski regular Paweł Mykietin is another significant factor in the film’s effect on the viewer. After the failure of the Gombrowicz adaptation 30 Door Key (Ferdydurke 1991), the director took a 17-year break from cinema and concentrated on painting. Since the return with Four Nights With Anna (2008), Skolimowski has not merely retained his quality but kept his curiosity and experimental mind. A fair amount of critics expressed surprise over the youthful spirit of the film. The most surprising thing about EO was that such a spectacular film actually won a prize.